Last night, despite opposition from the State Department of Commerce, the Mayor of Spokane, and activist groups like Futurewise and the Center for Justice, the Spokane County Board of Commissioners adopted a major expansion of the Urban Growth Area.

One of the biggest arguments from the critics against the UGA is one of cost. A large expansion could leave the County on the hook for millions in extra maintenance and capital costs over the next 20 years. But as the commissioners have argued, it’s fallacious to just cite the $1 billion-dollar-plus cost without comparing it to the cost of doing nothing. Growth, after all, will happen no matter what the county does.

But the figure Spokane County cited, one of the most important for measuring county-wide financial impact, was wildly inaccurate.

“The change, the dollar value from Alternative 1, which is the existing urban growth boundary, to Alternative 5 [the largest expansion] is approximately $2.5 million,” Spokane County Pederson said at the Feb. 27 hearing. “So, with or without the expansion of the UGA of those regional alternatives those capital costs need to be borne.” Commissioner Al French asked him to repeat the number – underscoring its small size.

Yet, to Spokane County’s skeptics, the number seemed way too low. When I talked to Dave Andersen, representing the Eastern Washington Department of Commerce, a few weeks ago, he thought it was a pretty big underestimate.

And he wasn’t the only one. Rick Eichstaedt, with the Center for Justice, emailed John Pederson about the number last week. Getting no immediate response, he sent a public records request, asking the county to “provide any documents, including but not limited to notes, e-mails, studies, memos or other documents that discuss this assertion or provide the basis for Mr. Pederson’sconclusion.”

Eichstaedt totaled up the capital costs cited for police officers, schools, libraries,and parks in the county’s own Environmental Impact Statement. Alternative One, by his calculation, was $824,304,000, while Alternative Fivewas $888,369,000. The difference was 64,065,000 – over 25 times the county’s stated costs – and that doesn’t even include maintenance and operations costs.

In a phone call this morning, Pederson says the number he had cited was wrong.

He says he had made a mistake of just looking at the differences in school capital costs – but even that would be wrong. School impacts alone make for a $56.6 million dollar difference. Pederson says, ultimately, he doesn’t know where he went wrong or how me messed up with the figures.

“It was an estimate in error I corrected yesterday,” Pederson says. “I noted to the board yesterday, when they had their deliberation, that that estimate was not accurate.”

He says he did not provide a corrected cost figure to the commissioners.  He says calculating costs is always going to be tricky and inexact when it comes to school districts, because school services aren’t directly provided for by the county.

Yes, that is a giant error and is particularly disturbing given how clear thenumbers are in the County’s own documents – documents he signed off on as theresponsible public official.  That number seems to be largely motivated bypolitics rather than good planning.  The problem is that there were actuallypeople who read his document that knew better.

Below, I’ve included full transcript of the initial exchange between AlFrench and John Pederson at the Feb. 27 UGA hearing. After that, there’s the PDFfrom the county's Environmental Impact Statement discussing cost consequences.

John Pederson: Looking at the range of alternatives, from Alternative 1through 5, if you look at the capital costs, which is estimated, based upon inpresent value of services in our adopted countywide planning policies and theregional levels of services, the delta, in other words the change, the dollarvalue from Alternative 1 which is the existing urban growth boundary toAlternative 5 is approximately 2.5 million dollars. So, with or without theexpansion of the UGA of those regional alternatives those capitol costs need tobe borne.

Al French: Mr. Pederson, I want to make sure that we don’t lose the realessence of what you just said. Because I know I’ve received a number of e-mailstalking about that by expanding the urban growth boundaries, we’re basicallyputting a billion dollar of tax burden on the backs of our taxpayers in thecounty. What you just said, is even if we go to the no-growth alternative, whichsays we’re not going to expand the boundary, we’re going to keep it exactly theway it is, the difference between that and the most aggressive alternativebefore us — the net cost difference is only $2.5 million, approximately.

Pederson: That’s correct, based on the assumptions we made about the levelsof service.

French: So the rest of that capitol cost has already been approved byprevious boards, and is already a part of, you know, our growth strategy for thenext 20 years.

From the county's Environmental Impact Statement: 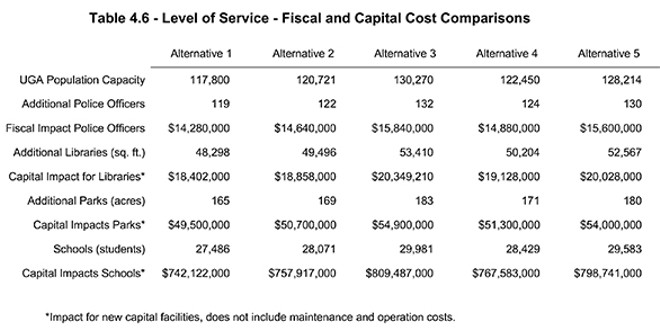