First of all, let me apologize for leaving you hanging last Friday without any breaking cat news. This week’s post should explain the lack of any new Cat Friday material last week, as well as make up for any CF withdrawals you may have experienced during that time.

I recently spent a very enjoyable week in the gorgeous city of Austin, Texas, visiting family. It was my first time in the Live Music Capital of the World, and as any cat lady/cat blogger should do when traveling, one of my goals while there was to visit the animal shelters. I spend time regularly with the cats at one of Spokane's shelters, so it interested me to see what the animal shelters in a big city like Austin were like. Of course I also had to get a cat fix somehow while on vacation. Thankfully, though, I also stayed in a house with four very adorable cats during the trip. It was a pretty cat-tastic time.

To fill ya’ll in (yes, everyone in Texas uses this phrase) on Austin and its amazing animal sheltering system, there are two main no-kill shelters there: the Austin Humane Society and Austin Pets Alive! In doing some research on Austin’s shelters I was ecstatic to find out that Austin's leaders (the 13th largest city in the U.S.), supported by a resolution passed by its city council, are trying to make it a no-kill city, meaning all adoptable pets find homes. In more detail, this means that at least 90 percent of pets taken into shelters are adopted back out into homes, and no animal that’s deemed healthy or treatable upon entering the shelter is euthanized solely for lack of space or because it’s not adopted in a designated time period.

The Austin Humane Society was the first shelter I visited during my stay. The shelter’s website says it was founded in 1952 and is the city’s largest, longest standing no-kill, nonprofit animal shelter. Pretty impressive.

As we entered the building, the first thing I noticed was the large glass walled area that looked into several small, free-roaming cat rooms. There were perches and cubbies and catwalks in the rooms with beds and blankets for the kitties to nap on. As we passed the windows to the main entrance, a lanky Siamese-mix jumped off her perch and meowed at us through the window. I applaud AHS for this awesome design choice – visitors are forced to see all these cute, adoptable cats right when they walk into the building!

The entire facility was very clean and organized. On a hot, humid Austin day it was cool and air-conditioned inside to keep the animals comfortable. Banks of individual, plexiglass-paned cat kennels in a U-shape are the first thing visitors see once inside the shelter. Despite the fact that we couldn’t readily access these kitties and open up their kennels to pet them, all of the cats were easy to view and had cards on their kennels with their names, ages, genders and other cute facts. In a big, busy shelter like AHS, limiting access to the cats no doubt helps to reduce their stress levels since people interested in adopting or interacting with them would need to request access to the cats. Chey Scott
The first thing visitors to the Austin Humane Society see is a big wall of adoptable cats.

While I may be one of the most ardent cat lovers out there, I do have a soft spot for all animals and we took a tour of the dog kennels at AHS as well. Just like the cat areas, the dogs’ individual kennels were clean and comfortable. What stood out most was how calm all of the dogs were.

Austin’s other well-known nonprofit no-kill shelter is called Austin Pets Alive!, and that organization is run almost entirely by volunteers. APA! is located just south of downtown Austin, and only recently moved into a facility that it shares with Austin’s municipal animal control, Austin Animal Center. One of APA!’s main focuses is pulling at-risk animals from other shelters that do euthanize for time or space.

The brightly-painted buildings at APA! created a cheery, welcoming feel, with a color scheme of bright orange, lime green and highly contrasting hues. The various buildings at the facility were surrounded on the perimeter with what had to be 100 or more dog runs; all of which were full. The runs featured both indoor and outdoor sections, and most of the dogs were in the open-air part of their runs. A roof over the outdoor part of the runs kept them out of the heat of the sun. 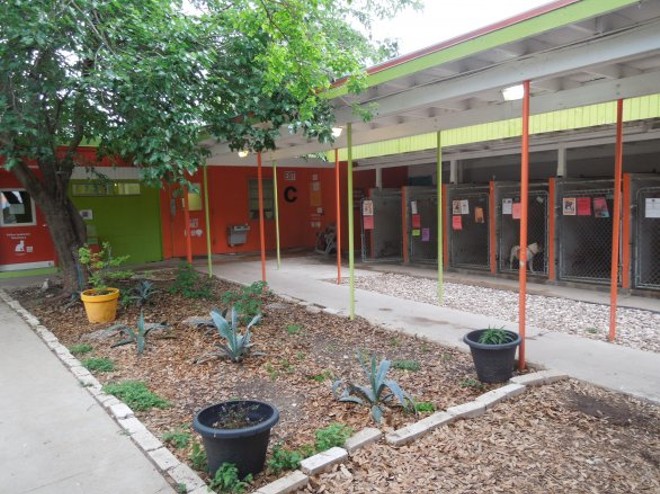 Chey Scott
A view of the indoor/outdoor dog kennels at Austin Pets Alive!

The first building we visited housed cats in free-roaming cat rooms and in banks of individual kennels on the walls. Visitors could take the cats out of their kennels to hold or pet them, and a small room in the back allowed visitors to bring a cat back to play in a more quiet setting. We chose a skinny little female tabby who must have been newly admitted because she lacked a kennel card telling her name and age. She devoured the treats we gave her preferred to be petted rather than play with the toys in the room. 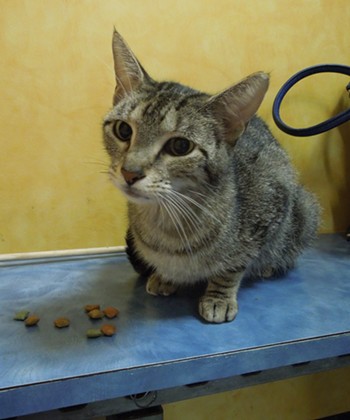 Chey Scott
We spent some time visiting this calm little tabby who appeared to be a new arrival at the shelter.
A second, separate building held cats that were quarantined because of ringworm infections. Ringworm is a highly contagious fungal infection that both cats and dogs can get – and humans – so animals with it need to be kept away from non-infected animals. It’s treatable, but takes significant time to treat in most cases. It impressed me that APA! had an entire building dedicated to housing ringworm-infected cats because many shelters don’t have adequate time or resources to treat cats with ringworm. The ringworm ward was cozy and clean, and the cats were in large, communal kennels the size of large closets. A group of six cats all sat snuggled together on a large window sill.


The last cat area at APA! we visited was the Feline Leukemia ward, which houses cats who have tested positive for the feline leukemia virus. The virus compromises the cats’ immune systems and ability to fight off disease, among other complications. It’s highly contagious, so cats who are FeLV+ need to live alone in a one-cat household, or only with other FeLV+ cats. Many cats succumb to the disease within 3-4 years of onset, largely due to complications that arise from other infections or disease, so these cats are hard to place for that reason, too.

The idea behind the FeLV+ ward at APA!, which looked like a small house that was completely outfitted for cats, is that many of the cats there will live the rest of their lives there; though a bulletin board on the wall with photos of the room’s current and past residents indicated that many former residents of the ward had been adopted. At the FeLV+ ward, we met several very friendly kitties who wanted nothing more than to play or be petted by visitors. None of them looked or acted differently than any healthy cat I’ve seen, and it was heartwarming to know that they had a safe, cozy place to stay while waiting to find a real, permanent home.

Both visits to Austin’s large no-kill animal shelters were enlightening and worthwhile because of the apparent and sincere value the city places on its homeless animals. If a city as large as Austin can make no-kill sheltering a standard practice – which is no easy task – it seems that with the right policies and programs in place, other cities – like Spokane – could achieve the same.

A Big Thank You