On April 15, two bombs exploded near the finish line at the Boston Marathon. While one suspect died in a shootout with police, the other faces justice.

Almost immediately, people in the Inland Northwest sought out ways to honor those who died or were injured. Shoes were collected at "The Joy of Running Together" statues at Riverfront Park, to distribute to organizations that serve the homeless population.

This photo story covers an April 22 run in which Runners Soul owner Curt Kinghorn and his son Nate brought together more than 500 runners from the region, including people who ran the Boston Marathon this year, to run 2.62 miles through Riverfront Park to honor those who were injured or died in the bombing.

This week, we cover Bloomsday, which is expected to attract 50,000 runners to the streets of Spokane. Our coverage includes a story by Scott Leadingham about the culture of running. Running may appear like a solitary sport to many. But friends gather and form running clubs, and specifically this year, run in solidarity with the people of Boston. Read more of Scott's story here. Photographs by Young Kwak.

(Left to right) Dana Peltran, Diane Gingrich and her husband Jay walk by an empty 2013 Boston Marathon bag placed on one of the "The Joy of Running Together" statues before the run.

Quinn Northrup, 4, donates a pair of shoes at one of the statues as his mother Shawna Kettner watches. The shoes will be donated to local organizations that serve the homeless population.

2013 Boston Marathon 5K finisher Mandy Maret, left, speaks with Boston Marathon runner Javier Pita before the run. After the explosions, Pita was stopped at the 25 mile mark of the marathon.

Theresa Kincaid donates a pair of shoes before the run. 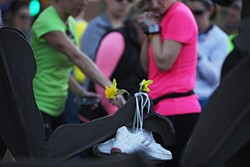 People gather near one of the statues holding a pair of donated shoes before the run.

Five-year-old Olivia Wolf, left, her twin sister Sophia, right, and Bery Sorvo play among the statues before the run.

People who ran the 2013 Boston Marathon gather to lead the run.

Other runners begin the run to honor the victims of the Boston Marathon bombings. 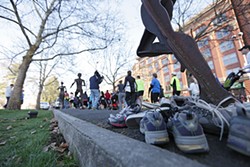 People pass by shoes donated by the statues. 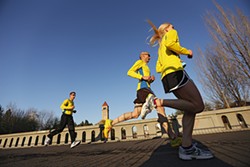 Dispatches from the local music scene: May 1 edition

With the death of SpokeFest and resignations at Bloomsday — will COVID kill local races?

Young Kwak is a photographer at the Inlander. He has worked on stories ranging from silver mining and cattle ranching to car racing and backyard wrestling, learning a lot about the Inland Northwest in the process...
Read More about Young Kwak