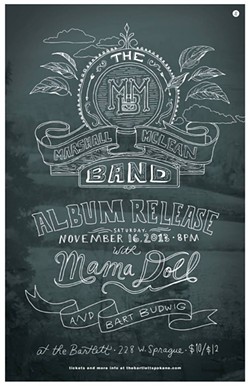 The Marshall McLean Band album release show will now be at nYne instead of the Bartlett.

Karli and Caleb Ingersoll are now well acquainted with the feeling of disappointment after things just don’t come together.

Last weekend, their yet-to-be-open-venue, the Bartlett’s grand opening bash was completely canceled. Today, it was announced Saturday’s Marshall McLean Band CD release party is being moved next door to nYne, making the show all-ages no longer.

McLean said last week if the Bartlett didn’t open in time for his show, he would want to move it to another location.

Indeed, the Sprague Avenue space did not come through.

According to Karli, the reason the Ingersolls only made the decision to move McLean’s show last night was because they wanted to be optimistic.

“We don’t like to appear flakey,” Karli says. “We will open, there’s no way it won’t open. I mean, the space is complete it’s just a matter of the last pieces.”

Those final steps include paperwork and inspections from the city along with contractor work. Karli says until these things are finished, there isn’t a definitive date when the Bartlett will open.

Tuesday’s Blitzen Trapper show will also be moved to nYne, but all other shows are on hiatus until the Bartlett can officially get the permits necessary to open.

Karli was thankful to nYne for absorbing some shows — including multiple soft opening shows in October — and also the countless volunteers who have come through to help move the Bartlett along to where it is now.

“It will be worth it when it opens ‘cause the space looks kick-ass,” Karli says. “It’s just a shame these shows are becoming casualties.”

Everything you want to know about the 57,000 Washington residents who enrolled in health insurance last month

Here's how you can help Brittny Eidsvoog and her family