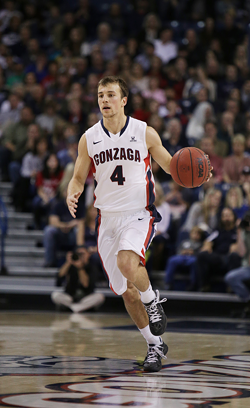 Young Kwak Photo
Kevin Pangos scored 27 points last night against Dayton and 18 against Chaminade today.
Gonzaga  basketball fans got a dose of pre-Thanksgiving reality dumped on their heads last night when the Zags blew an early lead  and  ended up  losing  to Dayton, 84-79.

For a team not used to losing in Maui, it was a tough one.
The Zags fouled up a storm last night, losing both big men, Sam Dower Jr. and Przemek Karnowski, in the final crucial minutes. Still, GU battled back, making some key baskets but couldn't seal the comeback.

Today, though, Zag Nation nursed its first hangover loss of the season by knocking off Division II Chaminade (the tournament host) 113-81. Seven Zags scored in double figures, with Dower and Gerard Coleman both dropping in 19.

Tomorrow, Gonzaga takes on Arkansas in the fifth place game. It's slated for a 2 pm tip off, and you can catch that on ESPN2 after ditching out of work early because, dude, it's basically Thanksgiving.

BIG GUYS
That loss to Dayton wasn't a fluke. Those guys were tough dudes. I think I saw one of them bench pressing David Stockton at one point. This is where the Zags are not excelling. Other than Dower and Karnowski, the team doesn't have much by way of size or strength. I'm sure fans were wishing Mike Hart was still scrambling around last night as Gonzaga got out rebounded 42-32 — and allowed Dayton's 18 offensive rebounds. This will need to change soon – and thankfully help is on the way. Freshman Ryan Edwards (7-foot-1) should be back soon after getting his tonsils removed and transfer Angel Nunez (6-8) becomes eligible on Dec. 20.

ZAG FANS TRAVEL WELL
Not unlike previous years that Gonzaga has gotten an invitation to Maui, there is a strong contingent of GU fans in the stands again this year at the Maui Classic. It's a good fit. It's getting cold, and colder, here in Spokane and Maui is both decidedly not cold and not Spokane. Still, that's no easy (or cheap) trip, yet they get a couple thousand folks down there. This is hardly a new phenomenon for Zag fans.

It was weirdly refreshing, for some reason, to see all those Dayton fans there last night. It's good to know that Gonzaga isn't a lone bastion of intense mid-major (yeah, yeah I know that's a bad word amongst GU lovers) fandom. Dayton packs their home arena every game and has the sort of devoted fans it's easy to believe only exist in the Northwest.

I'm not saying Dayton fans are superior in their travel habits. If the Zags scheduled a game on the moon, I personally know no less than a dozen fans who would begin studying rocket science.

DECEMBER
There's no rest for the weary. After playing three games in three days, GU returns to Spokane to take on Coppin St. on Sunday at 5 pm. That's a lot of basketball and Coppin St. isn't to be over looked. They beat Oregon State on Nov. 10.

They'll have some hard-earned rest for the rest of the week before New Mexico State comes to town on Dec. 7. Then, they are back in the air to head to West Virginia on Dec. 10.

Turkey talk for the Thanksgiving table