Pearl Jam gives the keys to Steve Gleason in Spokane 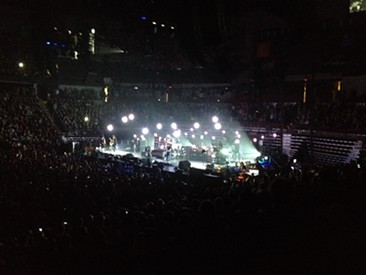 Pearl Jam  may have been playing in Spokane's largest indoor venue last night, but the show had the feel of something much more intimate.

Ed Vedder didn't scoot around the fact that the band hadn't played in Spokane in more than 20 years, despite the city being in Pearl Jam's home state. It felt genuine, as did the set list. And that's what makes this show perhaps one of the most emotional of the band's tour — Steve Gleason put together the slate of songs the band played. As Vedder said, "Steve Gleason is playing DJ tonight."

Gleason, a Spokane native and former WSU and New Orleans Saints linebacker, is suffering from ALS and has developed a tight bond with guitarist Mike McCready and the rest of the band. Here's him interviewing Vedder for an ESPN segment.

The list of songs Gleason dished out was a mix of deep cuts, new tracks and all of the favorites casual fans who haven't paid attention for the last 15 years could still appreciate — i.e. "Alive," "Jeremy," "Daughter," "Even Flow," etc. The packed arena was lapping it up and the new songs from the Lightning Bolt album held up to an arena test.

Vedder arrived on stage with a massive bottle of Towshend wine — made right here in Spokane — pouring it into the outstretched cups of the fan club members who occupied the floor of the arena, while also pouring ample amounts into his own mouth. It's good to share, people.

In what had to be one of the most bizarre moments of the tour, Vedder spotted a fan holding a sign reading "Will shave my head for Brain of J" and called out the dude — who had waist-long dreadlocks.

"Do you even have any hair?" Vedder asked?

The guy held up the ridiculously long ropes of hair.

And then later in the show, by God, the band brought the guy on stage, allowed him to head bang to "Brain of J," (an excellent punk number for the excellent Yield album), and then cut a decade's worth of hair from the guy's head. Here's video evidence.

I made it to the Portland show on Friday night, and that was a great one, too. But there was something about the relative intimacy of the Spokane Arena, the diversity of the set list (see it all right here) and, of course, the fact that Steve Gleason was in his hometown seeing his favorite band that made it really hit home. So, anybody want to head up to Calgary for the Monday night show?