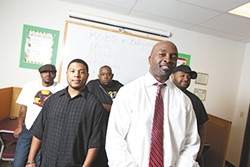 Back in April, we wrote a long cover story investigating the way that bullying had changed in Inland Northwest schools – and how students were fighting back. The advent of social media meant it had more difficult than ever for kids to escape their tormenters.

We focused mostly on the Spokane and Coeur d’Alene school districts, and touched on stories from Mead and East Valley districts. But it was Central Valley the story ended up impacting.

“It’s one thing about talking in general about what’s happening, but the individual that went to Mt. Spokane [High School] — that made it personal to me,” Deyarmin says, referring to the story of Christopher Borth, who experienced intense anxiety due to bullying.  “I saw his face. I saw his name.  I’ve got four kids who range from 20 down to 5.”

While Central Valley already has state-mandated rules and procedures in place to address bullying, Deyarmin thought the school could be doing more. He saw Tommy Williams, Jr.’s  “See It, Say it” anti-bullying program mentioned in the article, and thought it showed promise.

The high school has already begun to use Williams’ program. He visited each grade level during the first few days of school and met with staff. Williams’ strategy forms a large group of students dedicated to confronting bullying and comforting victims.

Next Monday at 7 pm in its auditorium, Central Valley High School will hold a meeting for parents, where students will present on the anti-bullying campaign.

“With bullying we’re always being reactive to it, because it gets brought into our office. We just thought as a building, ‘How can we be proactive?’” Deyarmin says. “We have kids who have come to us in the past, and have asked, ‘What more can we do to get the word out that this isn't OK?’”

MORNING BRIEFING: Nurses get locked out, a car explodes

What Spokane wants from state lawmakers