What Spokane wants from state lawmakers 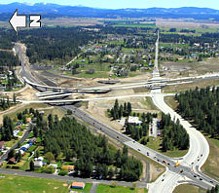 WSDOT photo
Work in progress on the North Spokane Corridor

Back in October, we told you about the Spokane City Council's wish list for the upcoming state legislative session. Topping the list: Give us the money to finally finish the older-than-the-council-members idea of a North-South Freeway. (More about what it will take to get that funding here.) This week, the council finalized the list — a combination of their wishes and the mayor's — and now hands it off to the city's lobbyists heading into the session, which starts Jan. 13.

Below are both lists. (Note the removal from the city's list of a request to increase punishment for vehicle prowling. That item was added by the mayor, but removed Monday by the council because of worries that such a change could undermine justice reform efforts aimed at reducing the number of nonviolent offenders in jail.)