Civic Theatre and Spokane Symphony team up for Les Miserables 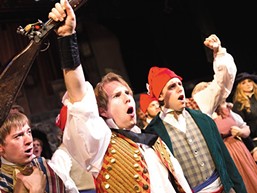 Stephen Schlange
The Civic's Les Miserables sold out this fall, but will return.

The Spokane Civic Theatre’s production of Les Miserables will see another run next year, this time accompanied by the Spokane Symphony at the Martin Woldson Theater at the Fox, it was announced today at a press conference. The show will last one weekend only, March 1 and 2.

Showing in October, the Civic’s performance was so well received tickets were completely sold out and another weekend was added to accommodate the demand.

Because of the production's popularity, the Civic's Jim Swoboda, who played Jean Valjean, had the idea for doing the show on a grander scale and suggested a collaboration between the theater and symphony. This led to a discussion with Nienhouse and Civic’s managing director, Jim Humes, whose organizations have never teamed up before.

“We’ll see how this goes and we hope to be able to work together again,” Humes says.
The March production will feature most of the original cast, props and costumes from the Civic’s earlier run, but some of the set pieces will need to be resized to fit the Fox stage. The symphony will play from the back of the stage while the well-loved musical unfolds in front. Resident Conductor Morihiko Nakahara will lead the orchestra.

Tickets for Les Mis will go on sale tomorrow, Dec. 18, with prices ranging from $40 to $125. Tickets can be purchased at ticketswest.com.

See the Inlander’s preview of the Civic’s original performance here.

MORNING BRIEFING: New details in the South Hill home invasion shooting and the most popular web searches of 2013