If you haven’t seen it yet, there are only a few more weeks to see “SPOMa: Spokane Modern Architecture” at the Northwest Museum of Arts and Culture. The celebration of Spokane’s mid-century architecture is open through Jan. 12. (If you attend First Night Spokane, MAC admission on New Year’s Day is free. Campbell House Holidays runs Dec. 20 to Jan. 5.)

We wrote about SPOMa way back in March when the exhibit opened:

Today, people say mid-century architecture was a movement of rebellion — a visual middle finger to the columns and gabled roofs that filled American suburbs. And in places like Spokane, the modern designs that started to pop up between 1948 and 1973 turned the cityscape upside down. Modernists posed questions: why are buildings made the way they are? What should come first: form or function?

“It was meant to be architecture for the masses. It was essentially a means by which people were saying, ‘You need a bank, but why are you making it look like a Greek temple?” says Aaron Bragg, a copywriter at Spokane design studio helveticka. “It was a rejection of these cookie-cutter designs and styles and going back to basics.”

The exhibit is dense with information for design and architecture fans, and easy to breeze through for those with a more casual interest. The modernist vision is immersive, and you’ll see buildings in Spokane differently when you leave.

See an insightful writeup from Karli Ingersoll here and more photos from Chad Ramsey here. The following timelapse video shows what went into setting up the exhibit, and there’s also a trailer for the exhibit’s mini-documentary here.

Coming up next at the MAC is “100 Stories - A Centennial Exhibition,” which commemorates the 100th anniversary of the Eastern Washington State Historical Society in April 2016. Along with many artifacts never before on display, the exhibit will include a series of events and programs.

Civic Theatre and Spokane Symphony team up for Les Miserables 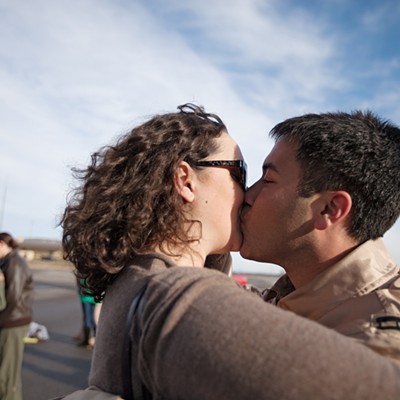