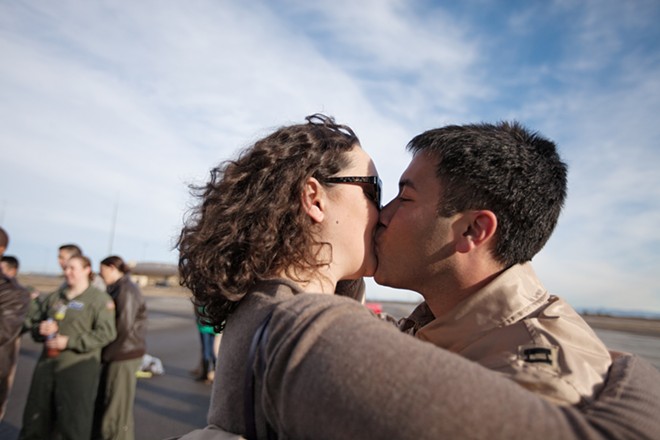 Young Kwak
93rd Air Refueling Squadron Captain Ariel Kayne, right, kisses his wife for the first time in three months, at Fairchild Air Force Base on Tuesday. He was deployed to the Transit Center at Manas, Kyrgyzstan.

Sara Kayne stands near a KC-135 on the flight line at Fairchild Air Force base, waiting for her husband, Captain Ariel Kayne, a pilot with the 93rd Air Refueling Squadron. He comes down the stairs from the airplane, shakes hands with several base personnel, including base commander Colonel Brian Newberry. The whole time he looks between the personnel and his wife. When he is done shaking hands, he runs over to his wife, gives her a hug and hands her some tulips. They exchange a few words and kiss.

He has been deployed at the Transit Center at Manas, Kyrgyzstan, flying a KC-135 as member of the 376th Expeditionary Operations Group for combat refueling missions over Afghanistan. Now in his tenth year of service, Kayne has been sent six times to Manas, each a two- to three-month deployment. 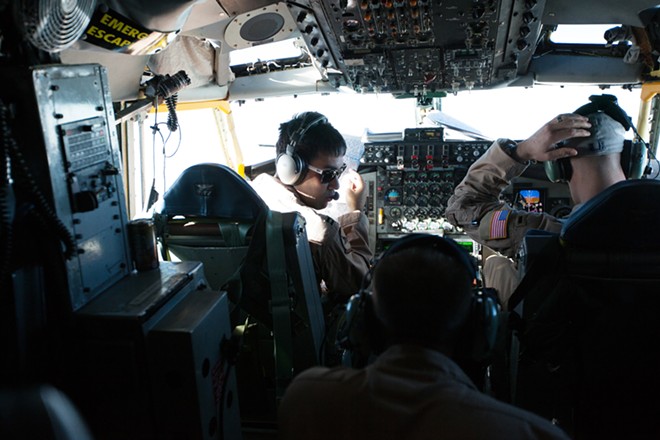 Young Kwak
(Left to right) Aircraft Commander and Captain Ariel Kayne, Senior Airman and Boom Operator Senior Airman Michael Weidman, and First Lieutenant and Co-Pilot Kevin Bishop fly part of the leg of a trip in a KC-135 from the Transit Center at Manas, Kyrgyzstan, to RAF Mildenhall, England, on Monday.

"Our mission is crucial out here. We provide refueling for all sorts of allied and American aircraft in Afghanistan. If there wasn't refueling capability in Afghanistan, guys on the ground would not get the air cover they are looking for. Reconnaissance and surveillance assets wouldn't be able to stay flying for the duration that they do."

He sees Manas as a home away from home. But, after three months of deployment, Kayne is ready to go home. He says he is looking forward to "seeing my wife, of course. After that, being able to step back from the deployed mission, take a deep breath, enjoy some time off during the holidays and get some turns in at the local hill."

Kayne says one of the challenges about reintegration after returning home is "realizing that I am home." He goes on to say, "In a deployed environment, the life stressors are a little bit different. Everything here (Manas) is either work, eat, sleep, work out ... At home, the trash has to be taken out, the dog has to be fed. All those little life stressors are something that I'm not used to, at least for the last three months."

He also says, "The hardest part is finding time to rebuild the connections that get a little frayed when you're gone."

But, he is not worrying about any of these things today. He is just happy to be home with his wife.

Les Mis, gay athletes in Sochi and a marriage proposal at city council