From Spokane to Broadway: Extended interview with Brandon O’Neill

In last week’s issue we wrote about Spokane native Brandon O’Neill, who’s part of the Broadway cast of Aladdin, and his musically talented family. Preview performances of Aladdin begin Feb. 26 at the New Amsterdam Theatre at the heart of Times Square, with opening night on March 20. O’Neill plays Kassim, one-third or Aladdin’s trio of sidekicks, a role he originated in the world premiere at Seattle’s 5th Avenue Theatre.

O’Neill left Spokane in 2001 to pursue music in Seattle, but has made time to stop by Spokane for Rough Congress reunions in recent years. He answered a few more of our questions about his start in Spokane, what it takes to get to Broadway and what to expect from the new Aladdin. 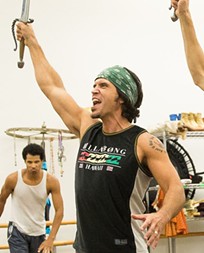 Brandon O'Neill at rehearsal for Aladdin.

Where are you now and what is your schedule like?

I am in Toronto, Ontario, at the Mirvish Theatre in my dressing room. We’ve been here for two months working on what’s called the “pre-Broadway” out of town tryout. Twelve weeks of 12-hour days. Just got out of another rehearsal.

Growing up, did you do much theater, or mostly singing and performing?

I didn't do much theater growing up. There was an arts program at my church that I was heavily involved with. This gave me my first chance at spoken lines on stage. I liked it but it did not provide the euphoria that singing or writing a song can produce. I concentrated on singing and then eventually writing and fronting bands. Acting was the last thing on my mind.

Is making it to Broadway something you imagined yourself doing when you were growing up?

Honestly, I never really imagined myself on Broadway as a kid. In my 20s my push was to make it as a band leader or solo artist. I always dreamed that my voice would pay the bills but never imagined musical theater as a venue for that. It just wasn't something I followed. The allure and mystique of NYC as a city where the "Best of the Best" go to test their talent on a national scale definitely crossed my mind, but Seattle has been so good to me, I had no reason to uproot my family and cross the country.

Aladdin is a once-in-a-lifetime opportunity. A chance to create a principal character on Broadway on which all others will base their performance for years to come. It's theater history in the making. I had to go.

You've called it a turning point when you performed in the Sondheim tribute with Marvin Hamlisch [with the Seattle Symphony in 2010]. How did that come about and what was it like?

When I booked the Sondheim tribute job with the Seattle Symphony, I had just returned from a time away from theater. When I made the choice to return, I told myself if I am going to do this, put my family through this, give up my life to this, then I am going to take it seriously and see how far I can go in theater. I put Broadway in my sights. That was the concert that I changed my trajectory. The Sondheim music was like a soundtrack for my Phoenix's rising. I sang with new power. New confidence. People noticed. From that day on, I made a decision to be viewed differently. I viewed myself differently, really. I honed my "brand" by staying at my best physically, being fearless, and making decisions with confidence. I started asking to be seen for leads and I started booking them.

Mark & Tracy Photography
Brandon O'Neill as the pirate king at a 5th Avenue Theatre production of The Pirates of Penzance.

Does the Broadway production feel familiar after the premiere at 5th Avenue, or is it a different experience?

The process is familiar, the product is completely different. I have had the good fortune of being trained in a theatre community in one of the greatest developmental hotbeds in the nation. The 5th Avenue Theatre and the Village Theatre have worldwide reputations for developing new works. I have been involved in four Pre-Broadway productions and many other pieces still in development. I'd say by now, I know what to bring to the table. So in that way, the process is familiar.

But this new Broadway version is entirely different from the Seattle production. New actors, new songs, new costumes and sets. Disney is pulling out all the stops. I can't wait for the world to see and hear what we're working on. It is also the first show I've done with this kind of pressure and expectation. So many people love the Disney Movie and expect magic. There's the trick. How do we take that beloved adventure story and give it the heart of a Broadway musical? Our genie can't detach his head or sprout 40 arms. Our leads can't talk their feelings to animal sidekicks. We're ordinary people getting out there doing extraordinary things.

How does the creative collaboration in musical theater compare to being part of a band?

I've often said being in a band is a bit like being married to the other members. You expose your soul to these people, put your "art" out there to be judged by other artists. It requires trust, and love and hard work. Its emotional. Break ups can feel like divorce. The Trio of Babkak, Omar, and Kassim is very similar to a band in that we are always onstage together. We're truly in it together. Each punch line requires a good setup and we are often in tight three-part harmony. It requires trust and it helps that we truly all make each other belly laugh. Because these characters have never been played before, we are asked to improv and riff comedically to help discover their voices. We do a ton of "woodshedding" of new improv material to bring to the creative team. It's ridiculously fun and Brian Gonzales and Jonathan Schwartz are so damn funny and good at what they do, it certainly makes my life easier.

Was there any pressure about coming from a musical family? Is there any competition among cousins?

There was a constant nurturing of the natural gifts in my family. Encouragement, support, laughs, singalongs. The sharing of venues and opportunities. We all love to share the bill with a family member. We had a family reunion a couple years back and four very young cousins and even a couple of the great grandkids revealed their gifts in spectacular fashion. It was incredible to witness. They showed songs they had written, instrumental and vocal abilites we never knew existed. The concert lasted hours and went deep into the night.

I've never felt competition among us. There’s a mutual admiration. It’s a unique thing to be truly happy for another’s success. Although, if someone wins a Grammy, it’s gonna get ugly. How do you thank a family as big as the O’Neills? “He said Kevin’s name why didn’t he say mine?”

Christmas carols at the O’Neill family Christmas is a four-part harmony affair. The singing lineage goes back generations. Both my father and his twin brother and my grandfather sang tenor in competitive barbershop quartets. On my mother’s side the Filipino and Hawaiian cultures both put singing at the center of their traditions. My mother has a beautiful singing voice. I often say I got my tone from my mom, my power from my dad. My two siblings also have incredible voices. My brother Nathan and I traveled the world with a quartet in high school. Car rides with my family were very often filled with five-part harmony.

Simple opportunities to hear and be heard and encouragement to “raise your voice” among so much love were common in our family. This is how singers are born.

Absolutely. We're all still friends and stay in touch. It’ll happen. The Congress is just too sexy to die.