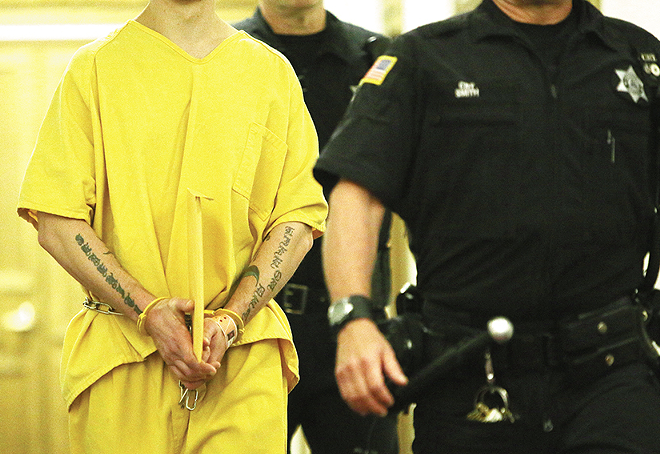 Bookended by two commission reports on the local justice system, 2013 made for a year of self-evaluation and reform in many ways. With a new chief at the helm of the Spokane Police Department, Spokane first received 26 recommendations from the city's Use of Force Commission and later ended the year with 43 recommendations from the Spokane County Criminal Justice Commission.

The city also suffered tragedy and controversy with the beating death of Delbert Belton drawing national attention as well as the divisive fatal shooting of Brendon Kaluza-Graham at the hand of Gail Gerlach.

Throughout the year, we at The Inlander tried to share the human voices and context behind many of those major reforms and local tragedies. With that in mind, here are 10 of the top crime and justice stories from The Inlander in 2013, in chronological order:

1. Data Cops, Feb. 5:
In a significant shift of everyday operations, the Spokane Police Department adopted the CompStat policing model, which uses data mapping and statistical analysis to assign officers to criminal "hot spots" throughout the city. It also improves communication between local agencies. But critics say the number-heavy model is open to manipulation or may lead to quotas.

2. Holding the Keys, March 12:
Spokane County Commissioners voted to take over responsibility for the overcrowded and understaffed Spokane County Jail in June, removing it from the management of the Sheriff's Office in hopes of centralizing authority to introduce new reforms and avoid budget disputes.

3. Calling For Help, May 22:
In late February, 33-year-old Christopher Parker called 911 for help and ended up dead on the floor of the Spokane County Jail. We pieced together what happened to him in his final hours. Read a recent update on the investigation into Parker's death.

4. Calculating Crime, June 12:
Taking a look at Spokane's notorious vehicle theft and property crime rates, we broke down the historic crime data to reveal that while most major cities has seen significant drops in crime rates in the past 25 years, Spokane has trended upward or held steady. We also examined how crime data has become a new focus for the SPD and public perceptions regarding crime.

5. Calculating Risks, June 25:
In this cover story, we examined the state's violent sexual predator protocols to illustrate how the system works to rehabilitate repeat sex offenders and how their victims try to cope.

6. Rolling Surveillance, July 23:
Amid rapid advances in police technology, the ACLU sounded a new warning against Automated License Plate Readers, which photograph and log time, place and registration data on hundreds of passing cars everyday. We explored how local police departments use such readers and privacy implications.

7. The Long Way Back, July 31:
After four years in prison, prosecutors dropped charges against three men previously featured in The Inlander's 2010 Injustice Project. Paul Statler, Tyler Gassman and Robert Larson finally won their freedom after being convicted in 2009 based on the word of a jailhouse snitch.

8. Long Hours, Aug. 7:
With staffing shortages and high demands for event security, the Spokane Police Department and the Spokane County Sheriff's Office have both racked up hundreds of thousands of dollars in overtime costs. Here's a look at where that money has gone and the risk of officer burnout.

9. Without A Trace, Sept. 10:
In a world of GPS, Facebook and widespread surveillance, it seems hard to imagine people still disappearing into thin air, but they do. This story explores four recent Inland Northwest cases and the heart-breaking uncertainty left by each missing loved one.

10. Our Kids, Our Problem, Oct. 1:
After the "sucker punch" heard round Spokane, we tried to cut through some of the hysteria to uncover who made up the downtown "street kid" community and what the city can do to keep streets safer for everyone, the kids included.

Look for the biggest Inlander stories of the year in this week's newspaper along with the most popular print stories, blog posts and other highlights online.