How the U.S. Pavilion could be re-covered and illuminated 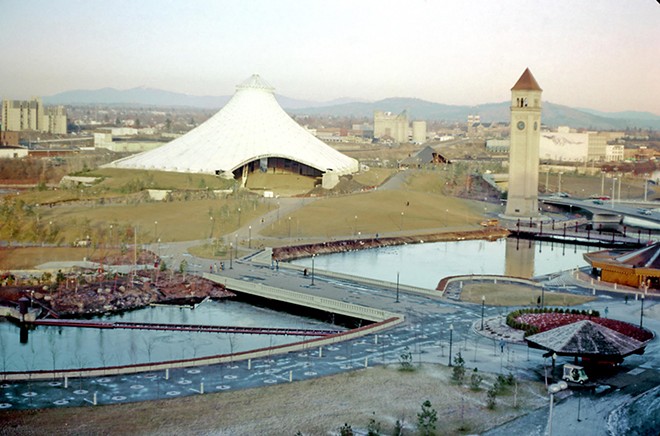 Spokane City Planning Department Collection/Washington State Archives
The U.S. Pavilion in Riverfront Park in 1976 when it was still covered, post-Expo. The covering was removed in 1978.

In this week’s Ideas Issue, we featured the idea of re-covering the U.S. Pavilion as part of the new master plan for updating Riverfront Park. The recommendations aren’t finalized, but a central part of the plan is renovating the pavilion area as an amphitheater-like venue for events. (The ice rink would be moved; the rides and IMAX may become history.)

The original vinyl fabric that covered the pavilion during Expo ’74 barely held up a few years. Something hardier would definitely be required, and one option is fabric made of Teflon-coated fiberglass. So what would that look like?

One major example is the Denver International Airport, where they used the material to create the peaked Jeppesen Terminal roof. Their site says it’s as thin as a credit card. If you want to get really technical, they refer to this as a “tensile membrane structure,” and here’s a thorough report about the background.

This material came out of NASA research, and it’s been around for a while — about as long as the pavilion, in fact. It was first used for the student center at the University of La Verne in California, built in 1974.

Council of Independent Colleges
The student center and Dailey Theater at the University of La Verne was built in 1974.

Find out more about the 2014 Riverfront Park Master Plan here, and give feedback at public meetings that will be scheduled for this spring.

HIGHER ED: Rolling out a bunch of great programs

A Lorde parody for those approaching 30