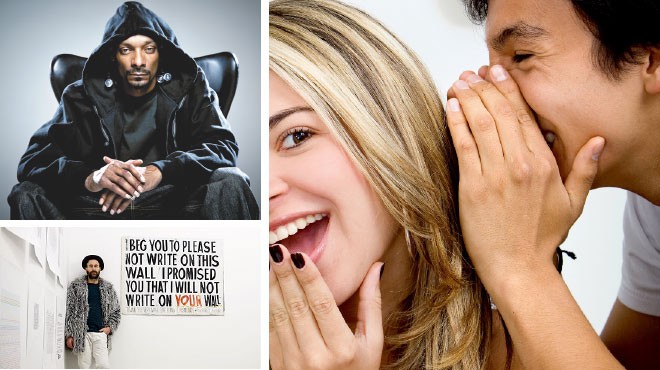 Snoop Lion comes to WSU, Kenneth Goldsmith comes to Gonzaga and new research says gossip may be good for society.

Guns on campus: Following a week with two fatal shootings on college campuses, Idaho’s State Senate is considering a bill that would allow students, teachers and others to have guns on campus, though they’d still be prohibited in residence halls and dorms, stadiums and concert halls that seat more than 1,000 people. (Idaho Statesman)

Poet lectures: On Feb. 10, Gonzaga’s English department is presenting a free lecture featuring the Museum of Modern Art’s first poet laureate, Kenneth Goldsmith. He’s read his poetry at the White House, been on “The Colbert Report” and will read from his latest book of poetry, Seven American Deaths and Disasters. (Gonzaga News Service)

Alice: A rendition of Lewis Carroll’s Alice’s Adventures in Wonderland is slated for a stage run beginning on Feb. 21. Creatively, the students are making the story their own by comparing Alice’s adventures to their own experiences at Gonzaga. Students have led everything from script writing to choreography to stage lighting. Tickets are on sale now. (Gonzaga News Service)

Grizzly bear: A 3-year-old grizzly named Lucy that had an MRI at WSU earlier this month died in a sanctuary in Montana. She suffered from two seizures this month and the sanctuary was still waiting for the results of her MRI when Lucy died. (SR)

Snoop Lion: The artist formerly known as Snoop Dogg will be headlining the Student Entertainment Board’s annual Springfest event. The Daily Evergreen posted on Facebook that Snoop Lion would open for the rap legend, not realizing that they are actually one and the same. (Daily Evergreen)

Gossip is good: Some researchers at Stanford have found that gossip and ostracism actually have positive effects: they are tools by which groups reform bullies, thwart exploitation of "nice people" and encourage cooperation. Go figure.

Tigers may become extinct: A few researchers from Princeton, home of the Tigers, published a paper predicting that Facebook may lose up to 80 percent of its users by 2017. Facebook came back and, using the same methodology as Princeton's researchers, predicted that Princeton won't even exist by 2021. Shots fired!

Chewelah's own Allen Stone gets signed to Capitol Records