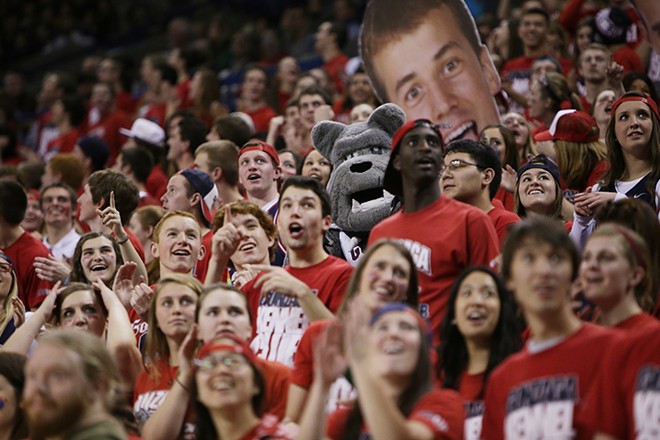 Young Kwak
Gonzaga's student section cheers during a game early in the season.
For the sixth consecutive year, a whole lot of people from Spokane are spending part of their March down in Las Vegas. Yeah, it's spring break for Gonzaga students, but it's also time for the West Coast Conference basketball tournament.

It's a wholesome celebration of the left side of the country's best mid-major basketball coupled with some good ol' fashioned Vegas debauchery. But there is a Catholic Mass on Sunday (on which there are no games) so believing Zag fans can get cleansed of whatever sort of nonsense they found on the strip the night before — and also maybe pray for a win in the next round...

Both Gonzaga men's and women's squads came out as regular season champions, earning number one seeds in the tournament. The women's team is playing tonight at 6 pm (BYUtv) against San Francisco, who eeked out a one-point win yesterday against LMU. The men are slated to play on Saturday night against Santa Clara at 6pm (ESPN2), who easily beat conference newcomer Pacific last night, 81-64.

NEW LOOK TOURNEY
There's a different look to the brackets of this year's WCC tournament. With the addition of Pacific to the conference, things had to be tweaked a bit. And that meant that the number one and two seeds in both the men's and women's tourneys no longer get double byes.

Last year, both the men and women had to win just two games to take home their respective WCC tourney trophies. This year, both squads will have to play three games in order to win. Some people in Zagland are not too happy about that — you can read some of their viewpoints here on the GU message boards.

The main gripe is that playing more in-conference games — especially against lower seeded teams, which is how a tournament works — the Zags are hurting their overall tournament resume. On the other hand, others have argued, it gives the conference more ESPN coverage than before (two quarterfinals, and all the semifinal and final games on the men's side are on ESPN), which is good for both exposure and the bottom line of the conference.

Another change is that teams no longer play back-to-back games because of the women's quarters taking place today and the men tomorrow. And with the BYU-mandated no-games-on-Sundays policy, there's a break between the quarters and semis. The final is now on Tuesday rather than Monday.

It's good for rest, but seems like a hell of a long time to be in Las Vegas. That place gets weird.

DOWN THE STRETCH INTO MARCH
Things got a little dicey for Mark Few's boys in the final weeks of the regular season. They went to Provo and lost. Then, they went down to San Diego and couldn't make a damn shot toward the end of the game, and lost that, too.

There was more than a little nervousness rippling around Zag Nation. Some blamed Kevin Pangos' ongoing toe troubles (more serious than you think), which might have explained his mere four points against USD, while others went as far as to claim that Few had lost his mojo.

But the Zags roared back for the final two games of the season in order to secure the regular season conference championship and secure the number one seed for this weekend's tournament. First, they defeated Pacific, thanks to a bounce-back 18 points from Pangos and another 17 from the friendly boy next door, Drew Barham. Then, in what preseason prognosticators figured to be a big conference matchup, the Zags dismantled St. Mary's down in Moraga, a building in which Gonzaga hasn't always played that well. That night, the Zags pounded the Gaels by 28 points, 75-47, with senior Sammy Dower Jr, Esq. dropping in 15 points and hauling in 10 boards.

Suddenly, Zag fans could let out a deep breath. All is well heading down to Vegas.

BRACKETOLOGY
Unless something went really haywire tomorrow night and an injustice unlike few others in the history of the game unfolded on Selection Sunday, the Zags are going to the NCAA tournament. Right now, ESPN has them as a nine seed, which is about where I'd put them, too. A couple big wins down in Sin City and maybe they move up a bit.

One thing is for certain — although the Spokane Arena is hosting NCAA tourney games this year, rules prevent the Zags from ending up there.

THIS GUY IS AN IDIOT
I'm an unapologetic supporter of college kids being irrationally excited about their school's basketball team, but there are rules, man. This ain't 'Nam.

Earlier this week there was plenty of press about players getting mixed up with fans when the student section flooded the court after big upsets. Gonzaga's David Stockton even said he got roughed up a bit when USD students celebrated their win.

Last night at UC Santa Barbara, things got even weirder and uglier when a UCSB student ran onto the court to confront Hawaii's head coach. Check out this insanity. The dude was arrested...eventually.

Remaining dates sell out for Spokane Civic Theatre's "The Mousetrap"