Parks and Rec is amazing. You know that already. And if you’re keeping up on the latest season, you’ve met a new character who’s making the show even better. Craig is a transplant from Eagleton who suffers from caring too much. The hilarious manic enthusiasm of that character is similar to the persona of the actor, Billy Eichner, on his Funny or Die show “Billy on the Street,” which means if you like Craig, you’ve got to try Billy on the Street. Part game show, part pure weirdness, the show follows Eichner has he rushes up to strangers on the streets of New York and asks them a question — like “Who’s hotter, Britney Spears or Meryl Streep?” — to win a dollar or asks if they recognize a celebrity he’s dragging alongside him. If they don’t (or if they answer incorrectly), he’ll call them a moron and charge away to find his next victim. But with his joy and excitement, the whole thing is good-natured and strangely addictive. Start with “It’s Spock! Do you care?” or Lightning Round with Rashida Jones. 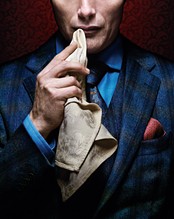 Just marathoned all of Hannibal, the creepy, kooky, all-together-ooky horror show from Clarkston High School graduate Bryan Fuller. Everybody, of course, knows the story of Hannibal Lecter, the sophisticated cannibal from Silence of The Lambs. But this show, set long, long before Silence, features Mr. Cannibal free, and largely unsuspected of being a mass murder.

It takes a certain degree of guts to attempt to compete with Anthony Hopkins’ performance that won an Academy Award, but Mads Mikkelsen does it by flattening camp and flamboyance down into subtlety. His menace comes from the slightest of smirks or a raised eyebrow.

It’s a show I didn’t really enjoy watching — it’s too gross and disturbing — but I can’t deny its quality: The show treats the vilest of gore with the same care for presentation and plating as a 12-course feast at a Michelin star restaurant. The result is an experience constantly threading between surreal dream and waking nightmare.

In honor of the 86th Academy Awards from last month, Kate Arthur over at Buzzfeed ranked all 85 best picture winners from years past and I realized that even though I thought I’d seen movies, I really hadn’t seen any movies. Thus began my quest to watch as many best picture and best picture nominated films as possible because, well, I feel like that’s a thing I can’t go the rest of my life without doing.

My first priorities were this year’s nominated films, which I thought were all pretty good, but my favorite so far has been All About Eve, best picture winner from 1950 and the movie Arthur had ranked in the number one spot. The thing about all these movies is sometimes they just don’t age well. The movie that won in 1947 (The Gentleman’s Agreement, which was interesting and one of the movies I feel like journalists should see but still not amazing) just doesn’t hold up in 2014. It’s unrelated and at this point the plots seem to contrived and sometimes just boring.

That wasn’t the case at all with All About Eve because I feel like we all can relate to wanting to do whatever it takes to make something of ourselves and accomplish our goals. Of course, Eve took it overboard at times but that only added to the film’s greatness. Also the movie is insightful in ways you couldn’t even imagine considering it’s more than half-a-century old. Just-out-of-her-prime actress Margo Channing (played by Bette Davis) says: “Funny business, a woman's career. The things you drop on your way up the ladder so you can move faster — you forget you need them again when you go back to being a woman.” Which is definitely still a thing these days. I don’t know why it took me 21+ years to watch it, but I don’t suggest you make the same mistake because it’s really that good. 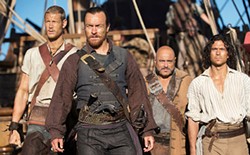 Recently, I have watched and waited patiently for the original Starz pirate politics drama, Black Sails, to find its sea-legs. Envisioned as a prequel to the famous story of Treasure Island, the show follows a sprawling collection of scurvy scoundrels and cutthroat prostitutes throughout their various schemes and conflicts at the pirate trading hub of New Providence Island.

An oft-scowling Capt. Flint heads an interchangeable cast of appropriately dirty ruffians and low-lifes. But while the production and acting seem solid, the story often wallows in soap-opera motives. They don’t skimp on gore when crews finally get around to pirating, but the show usually seems more interested in getting in its weekly dose of nudity.

But, it may finally have some new wind in the sails. This Saturday marks the finale of the first season and the hunt is on for a treasure beyond imagination. Let's get on with it.

Also, the NY Times’ David Carr on the modern problem of too much good TV.

It seems like everyone’s been talking about Twin Peaks lately. It came up with rumors of a revival, and then it’s come up more recently with comparisons to True Detective. (Even James Franco wrote about it.) And though the comparisons may be less compelling now than early in the season when it looked like True Detective might veer farther into the unworldly, the shows do have one element in common: atmosphere. So much of Twin Peaks is just weird, especially with the subtlety we now expect from TV dramas, but the sense of suspicion and dread in the northwoods is pervasive and effective. The residents of Twin Peaks say there’s something dark in the woods, but we’re already feeling it.

Twin Peaks is bizarre, creepy, uneven and ultimately unfinished or overfinished, depending on your perspective, but I can’t even fathom what it would have been like watching it back in the ’90s when TV shows just happened without a full response, investigation and dissection on Internet. (And, to be honest, my household got interested pre-True Detective through online discussion of the excellent animated show Gravity Falls.) The point is: If you haven’t seen it, or you haven’t seen it for a long time, you can watch the whole thing — all two, weird seasons of it — right now for free on Hulu.

“A Place Just Right”: The conclusion of the 2014 Northwest Bach Festival