“A Place Just Right”: The conclusion of the 2014 Northwest Bach Festival 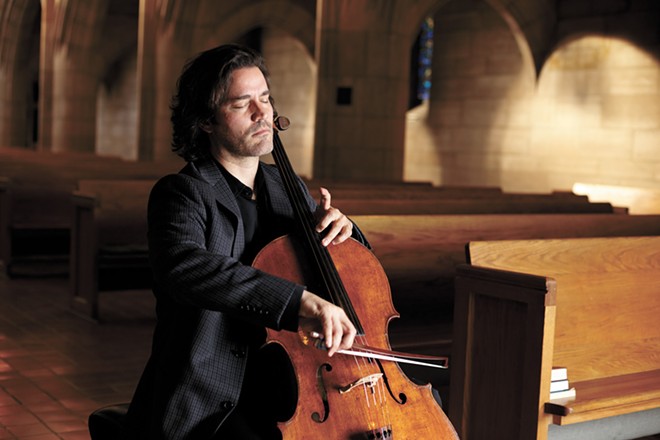 Young Kwak
Zuill Bailey at the Cathedral of St. John the Evangelist.

The transition from Gunther Schuller to Zuill Bailey was carved into stone Sunday after the final concert in Bailey’s first season as artistic director of the Northwest Bach Festival. Sharing the stage with renowned pianist Lara Downes, they led the St. John’s Cathedral audience on a tour of American musical history, with works from Copland, Bernstein and Foss. All music owes a debt to Bach, and this final concert served notice that the future of this festival will be expansive indeed.

Other highlights from the final week included: Bailey bringing Bach to the homeless at the West Central Episcopal Mission’s free Ash Wednesday lunch; his show at the Bing on Friday night, when he attacked all six of the preludes from Bach’s cello suites — just for fun, he played them out of order; and Saturday night’s “Bach to Brubeck” recital by Downes at Barrister Winery — a performance people were still raving about after Sunday’s show, especially the soulful stamp she put on “Rhapsody in Blue.” (You’ll be kicking yourself for a year if you missed it.)

As torrents of sunlight washed over the musical pilgrims out in the pews Sunday, the two-week festival hit its emotional crescendo during the duo’s powerfully serene version of Copland’s “Simple Gifts,” based on an old American folk song. Copland adapted the tune for Appalachian Spring, but the long-forgotten lyrics are worth remembering. “When we find ourselves in the place just right,” the 1848 original goes, “’twill be in the valley of love and delight.” That describes, perfectly, where the 2014 Bach Festival left us.

MORNING BRIEFING: Gunshots and the continued search for a missing plane