Why telling stories of strong women is important

Women’s History Month has drawn to a close, but with women comprising 51 percent of the U.S. population, perhaps we can continue to tell our stories for more than one month of 12. History is really just a collection of stories about people. Culture as a whole is about the stories we tell our children; these stories help build the framework of how they understand their place in society and the world. Unfortunately, when our films, television and other media tell stories, they tend to be stories about men in which women play a supporting role.

This observation is backed up by a mountain of numbers supporting it. While women make up the majority of the population, only 16 percent of protagonists in film are female. Is this because women are uninteresting or unrelatable? One answer emerges if we examine who is creating these stories. Filmmaking brings together writers, cinematographers, editors and directors who work together to bring a story to life. In these four key positions, again only 16 percent of the total are women. In ownership and board membership of major media companies, women are also unrepresented dramatically. Men aren’t unable to tell women’s stories, but this imbalance perpetuates the existing disparity by normalizing the absence of deep, fully human female characters.

If we look to history and literature, though, there is no shortage of fascinating women to learn from and enjoy. When I was recently asked to identify a woman who influenced me as a feminist, the best ones I could think of were Dorothy and Alice. Exploring Oz and Wonderland, respectively, they provided excellent examples of the type of tough, thoughtful, rebellious, crafty and kind woman I might want to become. When I looked at my favorite books and movies and historical figures now, I found fewer stories as centered on women as those from my childhood. So, I asked Facebook to help out and my friends generated a great list of ass-kicking, nurturing, scheming, leading and learning women.

While a younger woman I talked with “couldn’t think of a single one (influential female story)” and “was raised on Disney and princesses,” this group of people came up with an extensive list of fiction written by women and populated by strong female characters. Alice Walker, Maya Angelou, Margaret Atwood, Toni Morrison, Frances Hodgson Burnett, Amy Tan, Ana Castillo, Audre Lorde, Tina Fey, bell hooks, Virginia Woolf, Amy Goodman, and more were recommended as required reading for all people, regardless of gender. Earlier this month, Rachel Dolezal shared her to-do list for Women’s History Month. My only addition is a suggestion for readers to find a story from this list, or ask someone you like for their favorite woman’s story, and listen. Just listen. ♦

Taylor Weech, who hosts the weekly public affairs program Praxis on KYRS-FM, is a Spokane writer and activist. She's advocated, among other things, for environmental sustainability and all-ages access to the arts.

Kittens for freshmen and other local April Fools’ Day pranks 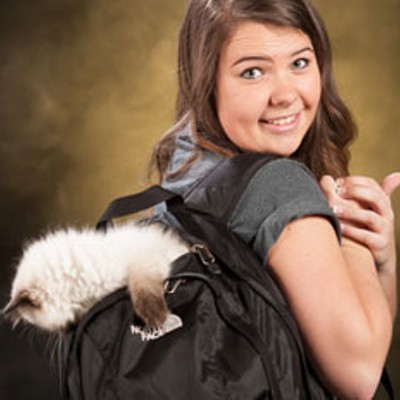