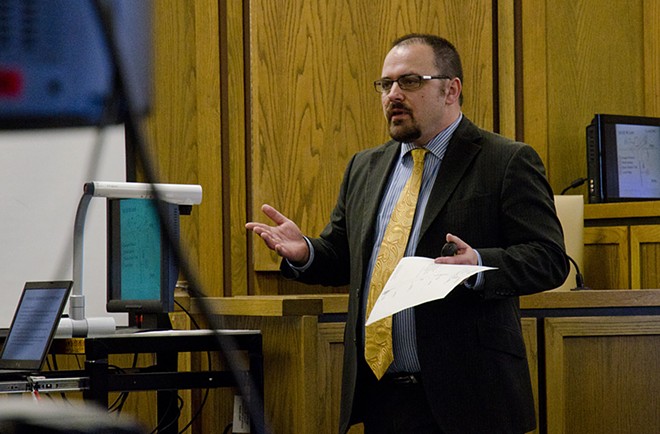 After a week of testimony and yesterday's closing arguments, jurors in the manslaughter trial of 57-year-old Gail Gerlach will return this morning to begin their deliberations on a final verdict regarding his fatal shooting of a man caught stealing his SUV in March of 2013.

Superior Court Judge Annette Plese and attorneys all acknowledged the emotional complexity of the case, which has divided the community over self-defense rights versus reckless vigilantism.

"You must not let your emotions overwhelm your rational thought process," Plese told the jurors.

Gerlach, a local maintenance manager, left his unlocked SUV warming up outside his Lee Street home on March 25, 2013. He returned to see 25-year-old Brendon Kaluza-Graham stealing his SUV out of the driveway and speeding off. Gerlach drew a handgun from his hip and fired a single shot through the rear window, killing Kaluza-Graham.

On the stand Wednesday, Gerlach testified he saw the driver turn around with something in his hand. He says he believed Kaluza-Graham was pointing a gun and feared for his life.

Investigators found no weapon and believe Kaluza-Graham was unarmed.

Deputy prosecutor Deric Martin contended in his closing arguments that Gerlach had started as the victim, but his status shifted when he turned angry then reckless as he fired that shot down a residential street.

Martin argued Gerlach and his wife's statements unsurprisingly offer a version of events that justifies the shooting, but Martin says their testimony turned inconsistent the more they tried to cover up what they knew deep down to be a mistake.

"The truth is like a weed," he said, poking through a "garden of lies."

Defense attorney Richard Lee argued the Gerlachs have never changed their stories. They always told investigators they believed their lives were in danger, they had no other choice.

Lee, during a nearly two-hour closing argument, repeatedly reviewed the evidence that suggested Gerlach had a reasonably clear view of the driver and likely saw keys flashing in his hand as he drove away. Lee brandished the keys like a pistol and described how it might strike fear into Gerlach.

Jurors were expected to gather this morning to begin deliberations on the charges. Attorneys and media will be notified when a verdict is reached.