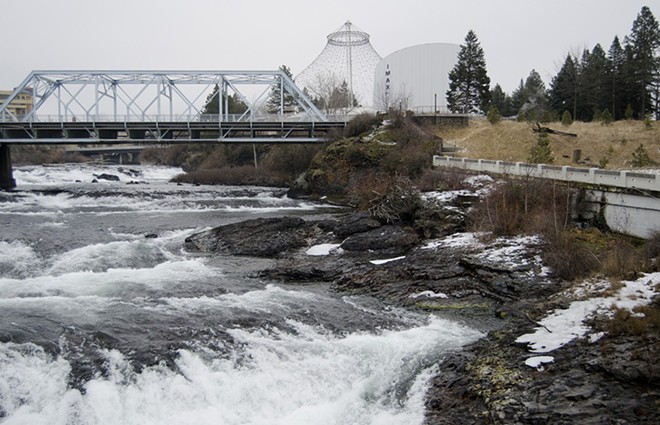 Lisa Waananen
An advisory committee has been working for a year to recommend updates for Riverfront Park.

After a year of seeking feedback and thinking about how to improve Riverfront Park, the advisory committee has distilled those ideas and discussions into a final report.

Inlander Publisher Ted McGregor is chairman of the committee and wrote this week about the year of discussions and planning that led up to this report. The committee, appointed by the mayor, includes representatives from the parks department, the city, the local business community and neighborhood organizations.

The Top Five Capital Recommendations are:

1. Create a North-South Promenade through the park.

2. Recover and light the pavilion as a multi-use facility.

3. Build a new structure for the Looff Carrousel.

5. Relocate the skating rink to the Gondola Meadow in the southwest corner of the park.

iDR Studio, Matt Melcher
The committee recommends moving the Ice Palace from the pavilion to the Gondola Meadow in the southwest corner of the park.

Additional recommendations include updating the gondola skyride, building two new playgrounds, creating better vehicle access points, adding rentable spaces and supporting a fieldhouse on the north bank of the river. (The fieldhouse, which wouldn’t be a parks department project, has already been mentioned in a levy the county may seek next year.)

The committee also recommends getting rid of two current park features: the amusement park rides (which doesn’t include the train) and the IMAX theater.

“The committee would like to not only close the IMAX theater but also remove the building that houses it. We came back to this debate again and again over the course of our process, but in the end it was not close: Nearly three-quarters of the committee felt the removal of the IMAX tower is “essential.” Times have changed since the IMAX opened in 1978: IMAX movies are now available a block away in River Park Square, and people can even watch movies on their phone. [Its] time has gone. Nearby, under the new Pavilion, outdoor summer movies will satisfy some of the demand for the movie experience in Riverfront Park. Removing the old tower will open up new space for the Park’s new Central Plaza, with River views. And it will allow the Pavilion to retake its place as the unimpeded centerpiece of Spokane.”

The report also includes a section on generating revenue, with ideas for making the park support itself. Recommendations start with traditional funding from the parks budget and parking revenue (the most reliable source of revenue right now), but also include a range of ideas for permits, concessions, sponsorships and naming rights. 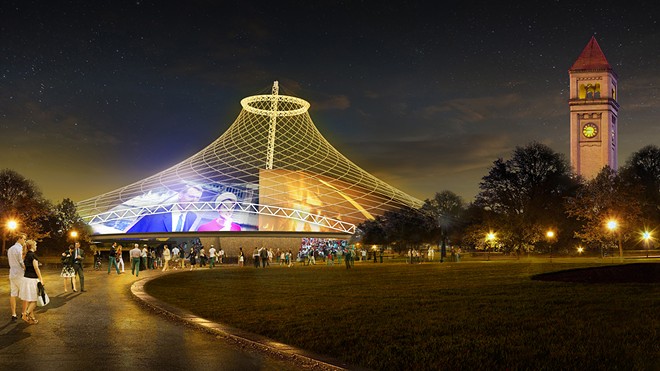 Olson Kundig Architects
The committee recommends re-covering the pavilion in some way, possibly with this moveable dome structure.

The concept of re-covering the pavilion led to one major aesthetic question: What should that look like? The report mentions both a translucent covering similar to the roof covering at the Denver airport and the moveable inner dome proposed by one architectural consultant, with no specific favorite at this point.

Read the full report here or below, and see more images here. A second presentation and public hearing is scheduled for April 24 at 6 pm at Spokane City Hall.