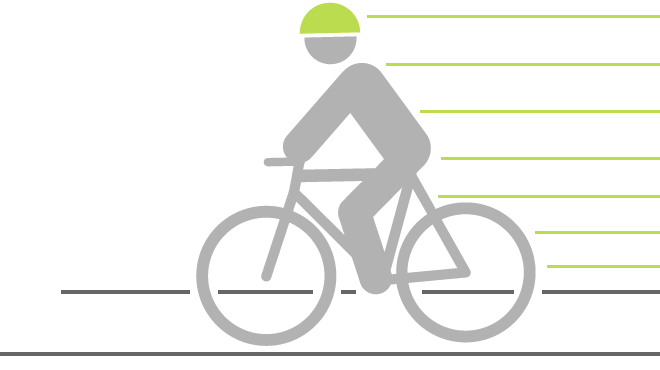 The end of a relationship, people say as a way of trite consolation, at least shows you what you want in another person.

Not always. Often it’s far more effective at showing you what you want in yourself. You see something awesome in someone else and say, hey, I want to be awesome in that way, too. It can be the catalyst for learning a new language, or reading Important Novels, or leaving the country, or getting really into art or sports or folk music.

So I asked my parents to lug the Huffy I got for $50 at a garage sale to my apartment, bought a sleek blue helmet from Wheel Sport, picked up an old Targus backpack from Staples, and officially became a bike commuter.

Years later, I still haven’t become the sort of person who clads himself in day-glo Lycra, or bikes to Seattle on a whim, watches DVR’d reruns of Le Tour de France, or Lives anywhere close to Strong. Heck, I often bike in jeans and dress shoes, but that still counts as biking.

Yes, sometimes it’s raining, and I end up with skunkish stripe of mud up my back and backpack. Yes, sometimes it’s cold as Kelvin, my glasses fog up from my breath escaping out the ski mask, and I have to shake the icicles off my nose. Yes, I’ve crashed, the morning of my birthday one year — either my pant leg caught, I hit a pothole, or the fundamental principles of earth gravity were momentarily altered — then my pedals fell apart on the way home while being cursed out by a pickup truck behind me.

But most the time, biking is bliss.

In general, Things That Are Good For the Environment require sacrifice: Take shorter showers. Sort your recyclables. Buy more expensive goods. Swap steak for arugula. Take the Amtrak instead of your corporate jet. Douse out your tire fire.

But most of the time, biking to work is the opposite of sacrifice. It’s thrill. It’s happiness.

It’s zooming down the Centennial Trail, past a hundred little vignettes, past the diehard cross-country runners, and the shed-a-few-pounds shufflers, and the baby-stroller strollers, and the kids playing in Riverfront, and the elderly couples on morning walks, hands in wrinkled hands. It’s going from Browne’s Addition to Kendall Yards without meeting a single stoplight or stop sign. It’s heading down to Peaceful Valley, across the Sandifur Bridge, up to the trail overlooking the Spokane River.

That’s how I start the day.

Many bikes have been lost along the way. There was the trusty black Huffy, leaving only a snipped shoelace-of-a-cable-lock — a temporary measure after I broke the other one with my own bare hands — after a Ron Paul rally I reported on. There was the far-pricier Giant Escape City, stolen right outside the Inlander office, in a bout of tragicomedy, the exact same place my car window had been busted out the day before.

And then there was the damaged survivor, the blue Schwinn with the frame wrenched askew by a would-be thief, bolt-cutter bitemarks across my still-intact cable lock. Each time I had to buy a replacement, I knew it was just a fraction of a cost of a car repair. Heck, if my work didn’t require me to own a car on occasion, I could buy a used bike every single month with the money I’d save.

Sure there are days I don’t feel like biking, and guess what? I don’t have to. Biking to work isn’t a vow or a bet or something you do for Lent. It’s something you do because it makes you feel good.

And I don’t react to non-bike-to-workers with judgment, I react to them with the same kind of as evangelical incredulity as those who haven’t seen Breaking Bad. “You don’t?” I say. “You don’t know what you’re missing.” Cresting over a hill in the warm early morning sun is the equivalent of that part in Season 3 when Hank is in the parking lot and he gets that phone call warning him that — well, you’ll just have to experience it for yourself. No spoilers.

Few life changes have made me happier.

Part of that’s escaping the confinement of the car. The reason for road rage has nothing to do with the road, I’ve concluded. It’s being cooped up in a teeny-tiny space, the angry other drivers separated by two panes of windshield. You’re more cramped, they’re more distant. If you’re late in a car, it’s a quick drop to pounding on the steering wheel, frustrated honking, aggressive lane changes, raised tempers, raised voices and raised fingers.

When you’re late on a bike, you channel all that frustration and anger into riding faster. In the bike lane, you just glide past cars trapped in a traffic jam. And on a nice summer day, waiting at a stop light is less like being caged and more like sunbathing.

In the ends, saving the earth is just a nice little bonus: It just means that when anyone complains about my hourlong showers, or wintertime heater blasting, or my green toxic-sludge dumping habits, I can counter, “Oh, yeah? Well, I ride a bike.”