What We've Been... looking forward to

Sunshine, summer beers, vacation days — so many things. But the one that I just can’t shake is still three months away. Arcade Fire is playing the Gorge in early August and I’ve had my ticket since Thanksgiving. I’m fangirl-ing hard and I’m not ashamed. A new album, weird costumes required, the sun setting over the Gorge. I can almost taste it. Until then, I’ll just be listening on repeat.

It’s not like you can’t find greens and other produce year-round at local grocery stores, but it’s just more satisfying to get them fresh and in-season at local farmers markets. So I’m excited that the Spokane Farmers’ Market — held on the field at 20 W. 5th Ave. — returns for the season this Saturday, and the Perry Street market moves back outside this Thursday. The big market in Moscow is also back as of last weekend, and a few new ones are also popping up this year. Some of the things I’m looking forward to the most — raspberries, huckleberries, sweet corn — won’t be in season yet, but these early markets are usually the best time for a selection of starter plants to get your own garden ready for the season.

There is nothing so delicious to me as the sweet taste of summer — aka iced tea. Grasping a cold glass of perspiring tea on a warm night, afternoon or morning is always incredible. During the winter I guzzle cup after cup of piping hot tea. But when it finally warms enough to drink iced tea without chattering, there’s just nothing better.

Even though the ache of Bloomsday is still very fresh in my legs, I’m already looking forward to a few other races that I plan to run for the first time this summer. I’ve never been much of a runner, so don’t ask me why I would subject myself to such torture. (Apologies to those who think running is far from torture). But as odd to me as it still sounds, running is an activity I’m gradually learning to enjoy, and with each accomplishment it becomes easier and easier. Better runners warn me I’ll get addicted to it… but I’m hesitant to believe that. I have no intentions to run a marathon or even a half-marathon.

Instead, I’ll start with a 5K (3.1 miles) by running this summer’s Negative Split, on Sunday, July 6. It’s a reasonable goal, and I’ll go into it without any expectations. But the bigger race I’m kind of giddy about, as in excited and nervous is the Priest Lake Triathlon, on Aug. 23. I’m envisioning attempting the sprint distance version, which is a 350 yd. swim, 11 mile mountain bike ride and a 5K run. If anything, it’s a great excuse to get up to Priest Lake, right? 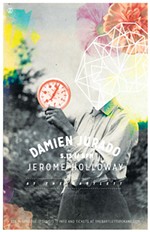 Atmospheric folk crooner Damien Jurado knits his music from a dark collection of solemn, scattered sounds and shimmering tones. Around his acoustic guitar, Jurado weaves layer upon droning layer to create a sort of comfortable doom in which we're all OK with the fact that it's not going to be OK. Or something like that. It's folk music with a deep, Seattle rain-soaked melancholy. And I cannot wait for Jurado play The Bartlett next week. Despite his regular touring of Europe and the East Coast, Jurado has actually played Spokane a couple of times recently, but this time I've finally managed to get tickets.