Inslee says additional protections would allow the state to raise the current consumption standard from 6.5 grams a day to 175 grams a day, without any significantly increased cancer risk from pollutants in regional waterways. 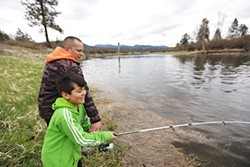 Young Kwak
Ray Pierre, vice-chair of the Kalispel tribe, fishes along the Pend Oreille River with his family.

"Many people have seen the mandate to update our water quality standards as a choice between protecting human health or protecting the economy,” Inslee says in a statement. “I reject that choice because both values are essential to our future.”

The Inlander wrote last year about the impact of fish consumption on American Indian communities, which traditionally rely more heavily on fish as part of their diet. Much of the public debate has resulted from coverage by InvestigateWest.

Inslee has asked the Department of Ecology to develop draft regulations by Sept. 30 with hopes to introduce a bill on the issue next year.

“Washingtonians’ actual risk to cancer and other harmful effects will be reduced by this proposal,” Inslee says. “We are making our waters cleaner and safer.”

“However, we are concerned that the standards put forth by the governor today could result in little to no improvement to water quality, and be a substantial detriment to Washington jobs and economic health," Keating says. "We will review the governor’s proposal in detail, including the updated fish consumption rate, risk level and legislative proposals.  We anticipate commenting on all proposals through the public comment process.”

MORNING BRIEFING: Multiple shootings, legal pot and too many cats