In case you've been off the grid, legal pot sales started in Washington yesterday and, despite shortages and high prices, it was basically one big party. See scenes from Spokane's first store here, the westside here and tiny Prosser, Wash. here. (Spokane's only open store, Spokane Green Leaf, is at 9107 N. Country Homes Blvd and will be open again Saturday at 10 am. The two others that have been licensed and are expected to open soon are Satori at 9301 N. Division St and Green Star Cannabis at 1403 N. Division St.) 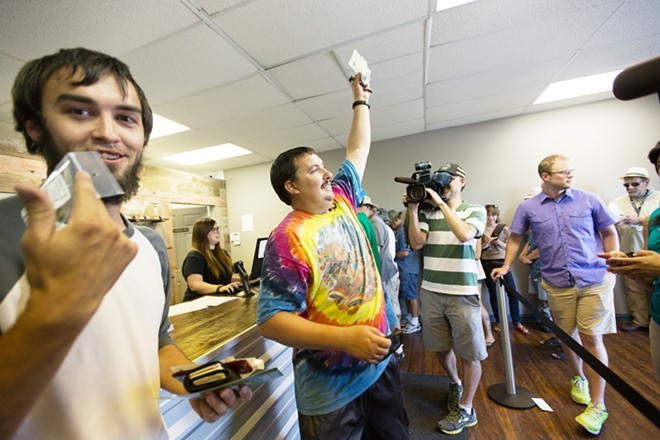 The moment was bittersweet, it appears, for the man who was first in line in Spokane and featured by all the local media. Mike Boyer tells the Spokesman he's been fired from two of his three part-time jobs and may lose another because he bought and smoked legal recreational marijuana yesterday. Still, he says, "I regret nothing." He's posted on Craigslist looking for a new job. (UPDATE: Boyer tells Newsweek he's been offered his job back and will take it.)

Even with a few stores open, plenty of challenges remain for the industry. Supplies are scarce and prices are high ($50 for two grams in Spokane Tuesday; for reference, an eighth is about 3.5 grams), so more growers will have to come online before supplies can be cheap enough to actually threaten the black market. Before breathlessly pronouncing the whole thing a failure, it's worth remembering that no one expects legal weed to wipe out the black market overnight, not even the initiative's supporters. Still, just how much of the black market remains is an ongoing concern. (The Stranger took on the supply question and other issues in this indictment of the Liquor Control Board's handling of this whole thing.)

I talked to Liquor Board member Chris Marr yesterday about the backlog of applications and disappointment over supply on opening day. (Much has been made about there only being one store in Seattle.) Marr points to the gamble retail applicants were taking as a potential reason more of them weren't ready for Tuesday. Because of the state's lottery, he says the board saw applicants — even in a weed hub like Seattle — who "didn't invest resources" in being ready for licensing because they thought their chances at winning the lottery were so slim. Marr says he's not sure "any amount of staffing" could have allowed the board to deal with the hundreds of applications it received, but acknowledged that the relatively low number of growers who've been licensed has created a sellers' market. He thinks that'll improve in coming months.

"We tried hard not to play to the expectations of regular users who felt our overriding goal availability and accessibility. Public safety had to be our number one goal," Marr says. "There's no doubt some people will be disappointed. To that, I say they'll just have to live with the disappointment."

President Obama was in Denver this week and was, naturally, offered some weed. He passed. He also shook hands with a guy in a horse mask. The Cannabist has the roundup you're looking for.

Speaking of The Cannabist, CBS profiled two of its pot critics. It's an interesting look at the job, even though the anchors devolve into in a giggle fit at the end.

Also in Colorado, the effort to convince kids to just say no continues with a new campaign urging them to not "be a lab rat." The campaign may even feature giant hamster cages near bus stops.

A medical marijuana farmers market was held in Los Angeles over the July 4 weekend. See what it was like here.

USA Today reports that a researcher looking to study the benefits of medical marijuana for veterans with PTSD was fired from her spot at the University of Arizona. She believes it was because of her pot-related work.

Supporters of a legalization initiative in Washington D.C. have turned in twice the number of signatures needed to get their measure on the November ballot. 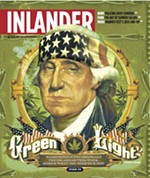 In the realm of new pot inventions, we've got two college students making a marijuana delivery app and my420mate.com, a dating site for people looking to "share a relaxed lifestyle and outlook on life," the founder says in a press release.

Finally, be sure to look for our pot issue on stands this week (the stories are also online here).