Sure, wages are the worst in Idaho, but at least $100 goes a long way. A crisp Benjamin is worth almost $10 more in Idaho than in Washington.

The Tax Foundation released this analysis earlier this week, examining regional price disparities for similar goods across the country. In Idaho, where stuff is cheaper, $100 is worth roughly $107. In Washington, that same amount of money equals about $97. Think of it this way: A Washingtonian's income must be 10 percent higher to enjoy the same buying power as someone living in Idaho.

A poor person in a high cost area — like Brooklyn or Queens — may be artificially boosted out of the range of income where they are eligible for welfare programs, despite still being very poor. At the same time, many people in low-price states may be eligible for welfare programs despite actually being much richer than they appear. If the same dollar value program is offered in New York City and rural South Dakota, it may be too small to help anyone in New York City, and yet so big it discourages work in South Dakota.


The states where a hundred bucks stretches the furthest are Mississippi, Arkansas, Missouri, Alabama, and South Dakota. In Washington D.C., Hawaii, New York, New Jersey and California, $100 is worth the least.

The map below shows how the relative value of $100 varies state by state. 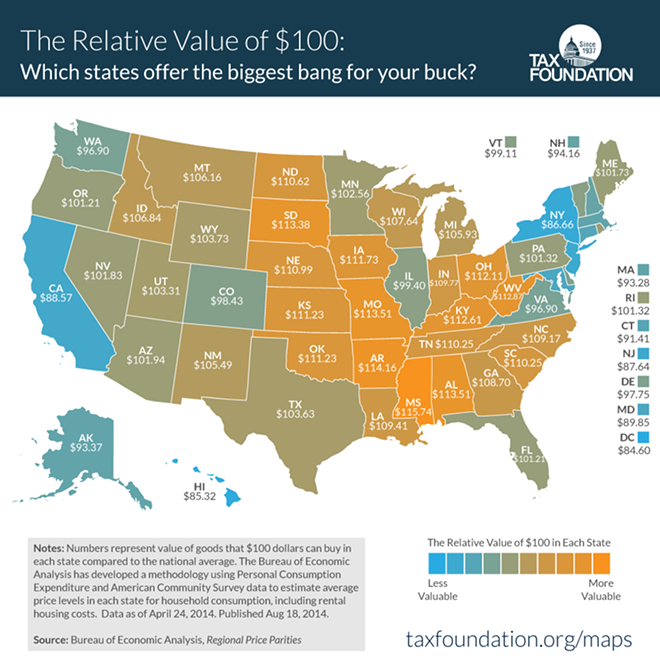