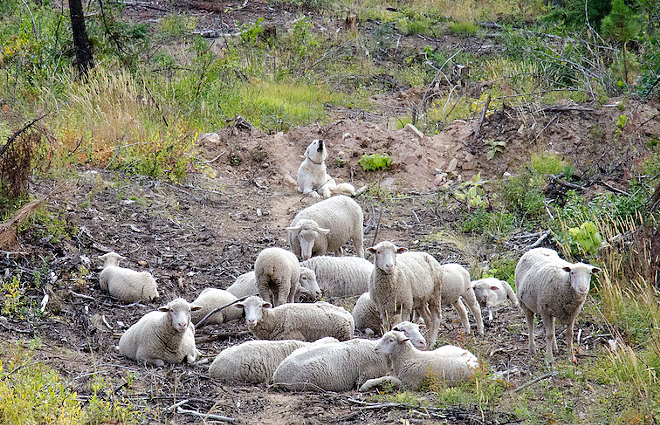 Jacob Jones
A guard dog barks out a warning while watching over a flock of sheep in southern Stevens County.

While the recent conflict between the Huckleberry wolf pack and Stevens County sheep may be winding down, wolf recovery and depredation will likely continue to draw bitter debate for years to come. The Washington Department of Fish & Wildlife must tread a delicate path between wildlife and residents while both increasingly cross into each other’s sanctuaries.

"It's an emotional issue,” he says. “Unfortunately, there don't seem to be a lot of folks in the middle. … You're either passionately for or passionately against.”

A helicopter marksman shot and killed an adult female member of the Huckleberry pack on Aug. 23. WDFW staff also set traplines, but no other wolves were killed. The rancher, Dave Dashiell, moved his sheep off the property a few days later, after losing more than 24 animals in at least eight separate attacks.

The Inlander wrote about the conflict in this week’s issue, but the complex and controversial issue has involved a number of additional statements, factors and reference materials that could not fit into that story.

Pozzanghera, who has spent 21 years with the department, says WDFW rarely authorizes lethal force against wolves. All wolf monitoring and management follows the state’s 2011 Gray Wolf Conservation and Management Plan. That process involves weighing a number of criteria and potential risks to both the pack and local livestock.

"The plan identifies if in fact you have conflicts with livestock, … there's a mechanism you can move through,” he says.

He emphasizes any decision to kill a wolf is not taken lightly. 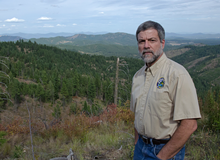 In an Aug. 29 tour of the conflict area — a section of private timber land in southern Stevens County where Dashiell had an agreement to graze his flock — Pozzanghera drives past huddles of bleating sheep. He points out the steep slopes and rugged terrain, which he explains complicated efforts to use nonlethal deterrents to run off the wolves.

Pulling to the side of a rutted-out logging road, Pozzanghera pulls out a conflict flow chart showing how the department must react to wolf conflicts. He says the policies involves increasingly aggressive steps, noting the steps were developed with the help of the Wolf Advisory Group. (Dashiell says he has served with the WAG as a member of the Cattle Producers of Washington.)

Most attacks on livestock now go through WDFW’s Conflict Section, a unit of specialists who coordinate investigations, control efforts and outreach on living with wildlife. Region 1, the state’s largest district, has three conflict staff and a conflict supervisor. Pozzanghera says the unit also deals with bears, cougars, elk and other animals, but “wolves are really dominating.”

Protocols state lethal action can only be approved after four confirmed depredations. Officials must also show that nonlethal deterrents have failed, attacks appear likely to continue and nothing unnatural continues to attract wolves to the area (such as a boneyard or other bait).

Pozzanghera says staff uses necropsies to confirm the source of any depredations. Wolves, coyotes and cougars all leave distinctive marks on their prey. The WDFW website offers a checklist for investigating attacks and a FAQ on the issue. 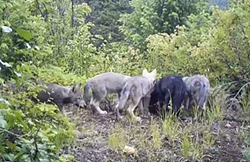 WDFW
Still from video of Huckleberry wolf pups from 2012.

Wildlife advocates voiced strong opposition to the lethal action, saying officials had not given nonlethal deterrents enough time to work or failed to provide enough resources to properly haze the animals from the area. Chase Gunnell, a spokesman with Conservation Northwest, says the group has worked with many ranchers to prevent depredation.

"It's worked for other ranchers across the West,” he says.

Gunnell lamented the loss of the pack’s breeding female, which had proven successful at producing pups for at least three years.

"There's no such thing as a surgical strike," he says of lethal action. "We were promised that this breeding pair wouldn't be harmed and that wasn't the case. … It's really unfortunate to lose an animal like that.”

The state’s number of breeding pairs counts toward recovery goals. While the number of wolves in Washington probably falls between 50 and 100, the state only lists five breeding pairs (before killing). It needs at least 15 pairs across the state to meet all established recovery benchmarks.

Jacob Jones
A flock of sheep passes through grazing land.

When asked about hunting wolves via helicopter, Pozzanghera acknowledges the unpopularity of the tactic, but says it should not be compared to sport hunting or “fair chase” situations.

"When you're talking about a response to a conflict situation with wolves, … once you've made the determination that you have to move into a lethal removal mode,” he says, “then the helicopter becomes the best available option to do that.”

WDFW contracts with U.S. Wildlife Services, a controversial branch of the USDA that specializes in animal extermination, for both the marksman and the helicopter. When the WDFW decided to remove the entire Wedge Wolf pack during a 2012 conflict, the state’s last lethal action, the effort reportedly cost nearly $77,000.

Pozzanghera says this action was much more limited, an effort to reduce the pack’s size and change behavior — not wipe out the entire pack. Since the Huckleberry pack hunted in a similar region for two years without any other conflicts with livestock, officials believe the increased size of the pack could be one factor that led them to seek out sheep as prey.

In his only public statement on the issue, Dashiell listed many frustrations with the state’s response to the conflict, accusing officials of failing to follow through on promises to protect his flock.

“Our ranch was left and high and dry to try and handle the situation ourselves while at the same time having our hands tied due to the wolf’s state endangered species status,” he writes. “With no other choice, we moved our sheep to a friend’s pasture. … Having to make this kind of change in the middle of the summer has caused considerable stress, expense and hardship to our operation.”

Dashiell, with support from the Stevens County Cattleman’s Association, has posted photos of sheep injured by the wolves. The association has also demanded increased access to location data from wolf radio collars.

“With at least 8 packs, or suspected packs, in Stevens County, the likelihood for livestock producers to experience wolf conflict is great,” a Sept. 3 SCCA letter states. “That possibility is even greater when producers do not know where the wolves are located and may unknowingly move their animals near a pack or den site …”

Pozzanghera argues the department does often share location data with ranchers. With Dashiell they gave him verbal updates. But with the recent conflict, much of the Huckleberry pack’s territory fell on the Spokane Indian Reservation, which gave the tribe a stake in protecting some of the data.

"The operator was in fact aware that this is the area where the Huckleberry pack occurs,” Pozzanghera argues.

Pozzanghera emphasizes the single collared wolf can not be used to track the entire pack, which may at times split and hunt separately, but the one wolf appears to have moved back toward reservation land after Sept. 2. Officials will continue tracking the animal.

Meanwhile, the rancher has moved his sheep early to winter grazing property. Wildlife officials helped conduct a sweep of the area last week and found no stragglers.

WDFW plans to work with other ranchers in the area to prevent additional attacks in the area, but Pozzanghera notes a single pack can cover an area of 250 to 350 square miles.