Why Scandal creator Shonda Rhimes' shows are so interesting (no, it's not because she's black)

Tonight, How To Get Away With Murder launches, along with new seasons of Grey’s Anatomy and Scandal. The same woman, arguably one of the most powerful showrunners on television, has her hands in all three: Shonda Rhimes.

Last week, that Rhimes got a lot of unanticipated press when New York Times TV critic Alessandra Stanley began her column on Rhimes with a line, “When Shonda Rhimes writes her autobiography, it should be called 'How to Get Away With Being an Angry Black Woman.'” She continued to talk about how, in her show, Rhimes rises above that stereotype, reinvents and reclaims it.

Numerous critics, viewers and even Rhimes herself cried foul, concentrating on how the column was racially insensitive.

In other words, a show like Key and Peele channels and subverts racial stereotypes every week, and there would be nothing wrong about pointing that out (including the stereotype of the Angry Black Man.)

But here, Stanley got Rhimes completely wrong. Anger and race isn’t what makes her interesting. No, she’s interesting for the way she deals with the entire range of emotions with characters of all races, genders and sexual orientations.

That Stanley honed in on single stereotype that did not represent the the thrust of her work – that’s what was racially offensive.

Yes, Rhimes' shows sometimes thrive on anger. But that’s just one color in her palette that she uses to paint bright, vivid, sometimes absurd and surreal TV shows.

I often refer to them as "Strong Woman Crying" shows, but that isn't meant to be an insult. In many shows, Strong Woman is a synonym for Dull Woman. She understands that men and women can be strong and competent, but also weak, brittle, ill-tempered and foolish. And that is where drama often comes from. At times it drags the show down, makes it repetitive and exhausting. Other times, it invigorates the show, injects it with an unhinged kind of energy.

It’s been a long time since I’ve watched Grey’s Anatomy (appropriately timed trivia fact: Katherine Heigl’s Izzie Stevens character was a graduate of the University of Washington school of medicine.) But from what I remember of Grey’s, it was infused with the same sort of wonderful over-the-top style as Scandal.

Yes, they all have lots of plot twists and life-or-death moments, but that’s not what invigorates them. It’s this overpowering sense of momentum and emotion and desire that sends characters hurtling in wild directions.

It’s melodrama, yes. It’s soap opera, yes. But neither of those things are bad things when they’re executed skillfully. And if nothing else, Rhimes knows what she’s doing.

Stylistically, she’s maybe the closest match to West Wing creator Aaron Sorkin, with her tendency to have characters deliver hyper-articulate barnburner speeches at the drop of a hat. But where the passion in Sorkin’s comes through wonkery – a Great Man standing before a podium and firing off rat-a-tat-tat statistics and studies to decimate his doofus of an opponent – Rhimes' monologues are almost entirely about emotional desire. They’re the equivalent of an “I Want” song from a musical: One character stands before the other, and the words just come spilling out with rhythms and beats and crescendos.

(Life lesson: In my experience, Rhimes-style Choose Me monologues are sadly not nearly as effective in romantic relationships as in real life.)

And it’s here that actors like Jeff Perry get a chance to show us some of TV’s best acting. It’s here where politically infused shows like 24 and House of Cards could take a lesson. Political drama isn’t about talking points. It’s about the motivations and desire behind it all.

A show like The Good Wife does a much better job at portraying actual adult relationships, where things like duty and family actually matter, where the right choice often means repressing all those emotions. But, like musicals, like poetry, the unrealism in Scandal is there to speak to a deeper reality, to how feelings really feel, stripped away from all that sense and rationality.

So, no, her characters don’t act like adults. But neither do our hearts and minds and guts. She captures that uncivilized adolescent id inside us all. We humans are whiny. We humans are angry. We’re overcome with desire and depression and anxiety and burning passion and self-destruction, though we manage to make the right choices in the end. Most of us. Usually.

Rhimes’ characters mostly don’t. Even a character like Olivia Pope, a paragon of intellect and competence, can’t stop her desires from sabotaging her life in every way.

That isn’t exclusively a female thing, by the way. Practically every character in Scandal follows his or her heart, and other body parts, into stupid, stupid places. But that’s the beauty of it. That’s the fun, and insight, of visiting that what-if world of unrealistic plot twists and unrealistic speeches. 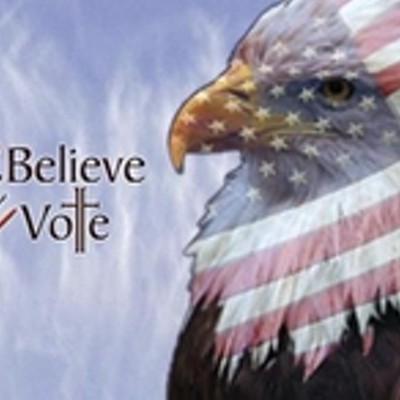 How would Jesus vote? Conservative group guides local churchgoers to the polls