CONCERT REVIEW: The bass dropped hard at Safe in Sound 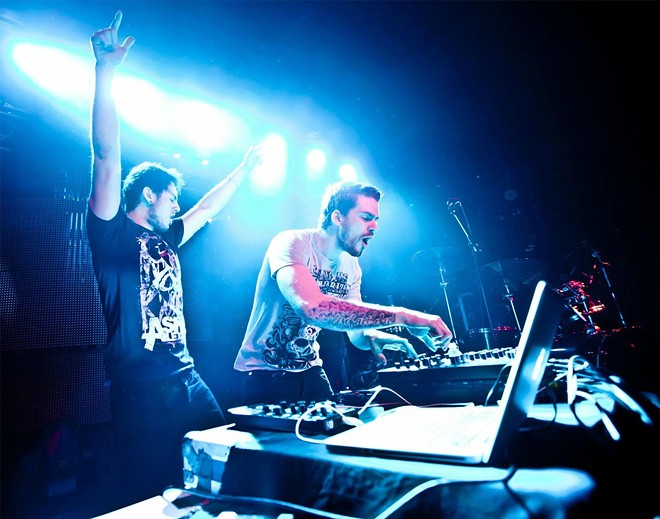 DJ's Christian Srigley and Leighton James create EDM duo Adventure Club.
There are 50,000 watts of sound shaking every hair on my arm. Bass-crazy college-aged kids in an altered state of mind have stepped into their other selves. The hardcore ravers are outfitted in neon fur while the more straight-edge kids have opted for crop tops saved only for occasions like this. When the bass drops, everyone loses their freaking mind.

Safe in Sound is a traveling EDM festival making its way through over 20 cities this fall. The lineup changes slightly depending on the show, and last night the Spokane Arena hosted Destroid, Adventure Club and Flux Pavilion.

Artists Excision, Downlink and KJ Sawka combine to become the dubstep band known as Destroid. They dress in armor and face-covering helmets, mimicking something of a Daft Punk look. The rapper, who acted more as a hype man, was terrifying with his Darth Vader voice, but after a while it became almost normal. Their sound was heavy, leaning often on multiple drops per song.

Holding brief breaks between sets seems unusual for the setting, considering that at many electronic music shows the music is continuous and doesn't stop until the night is over. However, with over five hours of music planned, it was healthy to take a couple breathers. As the crowd shuffled around, a chorus of gentle “excuse me’s” floated around among the surprisingly tame and polite audience.

The next act was Adventure Club, a Canadian duo growing in popularity due to singles like “Gold” and collaborations with current EDM sensation Krewella. Their projected backdrop included their trademark letter “A” creatively and repetitively in a way that couldn’t be ignored. Some graphics also included facial images, contrasting the stereotypical flashing of primary colors often used in the EDM scene. Best received by the crowd was Adventure Club’s final song, which was a mash up of “Crave You” and a remix of Lana Del Rey’s “Summertime Sadness.”

While still living in the dub sphere, DJ Flux Pavilion dipped his toes into a trap-inspired sound, creating something groovier. Queen’s “We Will Rock You” was remixed to make the stomp-and-clap intro inundated with bass. The voice of Childish Gambino was featured in “Do or Die,” and the famous remix of “Gold Dust,” originally by DJ Fresh, began with a dramatic slow clap and wrapped up with a false ending before Flux Pavilion came back out minutes later for the drop. We went absolutely nuts.

The rave/EDM scene has evolved from all-night parties in abandoned warehouses to ticketed events with touring acts in only a couple of decades, but the crowd at Safe in Sound probably isn't old enough to recall what it used to be like. The young people of the Inland Northwest are hungry for dub, and last night they found it.

"Black Spokane" looks at civil rights in the Inland Northwest