The text, giddy about the last-minute launch of a website attacking Josh Arritola, came late Tuesday evening. It was from Josh Arritola.

“Matt’s team is preparing an attack on me but they uploaded it too soon and we are preparing to debunk it before they have a chance,” Arritola wrote. (It’s worth noting, however, that www.whoisjosharritola.com claims to be unaffiliated with any candidate or political group.)

This isn’t the first time the seat has spawned an attack website. Two years ago, the Inland NW Leadership PAC put out The Shea Report, a rundown of the many controversies that have dogged Shea for the past six years. (I tackled its problems here.) But this new attack page goes after Shea’s opponent, questioning his political associations, his business record, and the degree to which he was homeless. It makes the now-familiar accusation that Arritola was secretly recruited by establishment Republicans, but with a few new wrinkles. 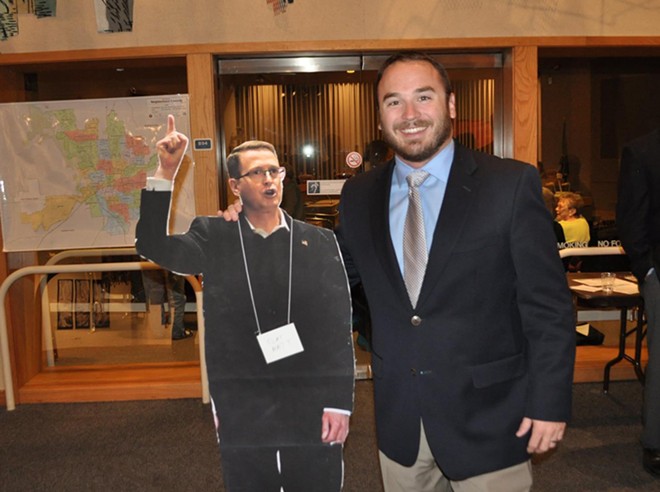 Arritola has admitted to the Inlander that he made several factual mistakes during his debate with Shea: He was incorrect when he said that the city of Spokane Valley hired a lobbyist because Shea's representation had been so poor, and incorrect when he said that every donation to Shea but one came from outside the 4th District. But the site, so far, doesn't focus on those.

This post summarizes the claims made on the anti-Arritola site, gives some context and double-checks the facts, and gives Arritola a chance to respond. If you want a more general overview of the race check here, or a collection of Matt Shea quotes, check here.

"Who Is Josh Arritola?" continues the liberal-by-association accusations that have defined the majority of Shea’s attacks on Arritola.

In the debate, however, Arritola said that not only is he against abortion, he’s against it in all circumstances, a position held by only 31 percent of Republicans nationwide.

Similarly, it links to the endorsement of Arritola in the Progressive Voters Guide, without mentioning how tepid the endorsement actually is: “The only candidates in this race are conservative Republicans who are out of step with mainstream values on many issues. Nevertheless, Josh Arritola is the better choice in this race… While we don't agree with his positions on women's health, the environment, and other important issues, he would bring a level of professionalism and reasonableness that Shea lacks.”

It also takes on Arritola’s endorsement by the Association of Washington Business. The site, helpfully, outlines the reasons why Shea voted against certain bills, preventing him from getting an automatic endorsement. (In 2013, partially because of his Boeing vote, Shea also had one of the lowest Republican records in the Legislature from the AWB.) It then argues:

“Additionally, Josh’s comment “Matt Shea is the ONLY incumbent Republican NOT endorsed” is not true as a number of the Freedom Agenda team did not get the automatic endorsements because they too were under the 80% requirement. So much for the AWB and for Arritola telling the TRUTH.”

In reality, the other members of the Freedom Agenda group were endorsed, though not automatically. Dave Taylor and Elizabeth Scott are listed under the AWB’s additional endorsements page, the same page that lists the endorsement of Arritola. Jason Overstreet, the final member of the main Freedom Agenda team, isn’t running for re-election – so he wasn’t up for an endorsement.


Another section, meanwhile, argues Arritola was initially supportive of the gas tax. In the debate and in his interviews with the Inlander, Arritola has always been clear that he’s opposed to the tax. "They obviously can't cite any examples [of support of the tax]," Arritola says. "We have to clean up the $2.9 billion annually in transportation waste, I've been saying it all year."

“In radio ads and even in an on-line voter’s guide Josh Arritola refers to himself as a ‘poor, homeless child.’ He says he and his sister were homeless and on the street. Most would be sympathetic and supportive of a person overcoming this beginning – don’t you think?  Sure – it’s a good strategy – but is it true?”

The website continues to argue, however, that this happened Josh’s senior year of high school, and after DSHS found that he and his sister had been abandoned by their parents, a home was “instantly” provided to them.

“To what extent will a person go to get votes?  I think this tells us a lot about Josh’s character — insinuating that he was a young child and excluding the pertinent facts makes a good story — but does not paint a truthful picture,” the anonymous writer wrote. “Shame on you, Josh.”

Lydia Weatherly, the woman who took in Arritola and his sister, responded to the attack in an email put out by the Arritola campaign:

“Josh has absolutely nothing to be ashamed of.  It is unbelievable that Matt Shea’s ‘supporters’ would dismiss Josh’s background to score political points.

It was a difficult transition for Josh going from a life without rules or parental guidance to a house where there were rules and parents in place, but with the love and support of a family Josh excelled.  My husband and I are so proud of the man Josh has become: a husband, an officer in the Air Force, and business owner.”

When we asked Arritola about this, he said that he was 16 when his mom abandoned him and 17 "I lived at the church for a week before the Weatherly family took me in,” Arritola emails. (He says DSHS was never called, to his knowledge. "I'm not sure where they got that false fact.")

Whether that experience counts as “homeless” depends on your definition. It does match a broader definition used by the U.S. Department of Health and Human Services.

“Is Haploos a Real Company, or just a Front?”

This section makes two allegations: That Arritola’s consulting company “Haploos” may not be real, and that employees of this possibly fake company thought Arritola was a horrible manager.

“Was this appearance of a business contrived to have us believe there is an actual, operating business called Haploos? If it was a real business, what happened to those 46 jobs Arritola claims to have created?

Hard to say, but it’s readily apparent that there’s no such thing as an ‘investigative reporter’ in Spokane to track down all these loose ends!’'”

The argument relies on the fact that Haploos is no longer in its office, and that its incorporation filing with Washington state comes from 2011, instead of 2008.

“Apparently moving offices to manage overhead makes my company a “front.”  This is something real businesses do all the time and career politician personal injury lawyers do not understand.

The ridiculous allegation that my company was founded at the end of 2011 would be laughable if it was not so pathetic.  My company had a corporate restructure in 2011 where we transitioned from being organized as an LLC to three different S corps and a Canadian ULC in order to be in better compliance with national and international tax laws.  It’s no surprise that an ambulance-chasing personal injury lawyer and his “supporters” do not understand the difference between corporate restructuring and starting a new company.”

“Currently operating and paying taxes! We just presented at the Alaska Oil and Gas Congress,” Arritola responds when asked if the company is still operating. “We switched to a remote office model because our clients are spread out around North America.”

More problematic for Arritola is the link to anonymous reviews from former employees.

GlassDoor.com lists three reviews for Haploos, all of them very negative about Arritola, and all of them from 2014.

“This became an issue shortly after I started running,” Arritola says. “We have been battling the reviews. They have been posting a lot and we have been challenging them. Most have come down.”

While each review appears to have a different writing style, they’re all anonymous, making it hard to distinguish if they’re any more reliable than your average RateMyTeachers.com profile. Here, for comparison, are the reviews for Career Path Services, rated as the best large non-profit to work for by Seattle Business Magazine.

“Are Republican Insiders Behind Joshua Arritola?

It’s an interesting attack: In effect, it’s Shea’s allies, not his opponent, arguing that more big name Republicans oppose Shea than will publicly admit it. It’s an attack that’s come since the beginning of the campaign, not a new one: In late February, this attack came out in a piece from the Western Journalism Review, the same national site that Shea condemned two years ago when it published an article about his former opponent’s Playboy pictures.

This time the publication quotes Shea extensively, praising him as a “true conservative” and speculating that Rep. Kevin Parker and former Spokane GOP chair Ben Oakley conspired to recruit Arritola to run against him. It relies mostly on the fact that Oakley introduced Arritola as Shea’s primary opponent at the Roanoke Conference in January.

“As I thought it might be, the author of this article wanted to remain anonymous,” the Western Journalism Review responded when asked who wrote it. “Thank you for your inquiry and I apologize for not being able to be of more assistance.” (Shea says the rumors he wrote it are “absurd.”)

But local Republican leaders didn’t put much stock in it. “There was unanimous consent that the article was garbage and it was only intended to inflame,” former Spokane GOP chair Matthew Pederson said a few weeks ago. “It was just wasn’t a credible article.  A lot of things I knew personally to be absolutely false.”

“Since Mr. Arritola was a declared candidate as a Republican, I felt it OK to introduce him to friends, including several lobbyists [at the Roanoke Conference,] as I would do for any Republican who is running for the Legislature.  This is a completely normal practice, just as I have done for other Republicans in Spokane.  I did NOT ask for funds, say I had endorsed Josh, or say the SCRCC had a stance on the race because we do not…

For the record, Rep. Kevin Parker has had nothing to do with any of this and whoever is dragging him into this is irresponsible.”

Far from endorsing Shea’s opponent, in fact, Rep. Kevin Parker wouldn’t even go on the record to answer questions about Shea, instead sending a generic text message about how Parker has been focusing on bipartisan solutions to protect Washington’s economy and most vulnerable. If Parker had recruited Arritola, it’s strange behavior.

"Who Is Josh Arritola?", however, speculates on a conspiracy even more vast, that former US Sen. Slade Gorton, later an Arritola endorser, specifically helped gerrymander the boundaries of the 4th District in 2012 to include Arritola’s property.

“How do you think the boundary change happened to go right around his residence?” the anonymous writer argues. “How does an unknown political outsider raise more than $100,000 in his first race, let alone get the endorsements of so many powerful Republican officials?”

To summarize, the site is arguing that Sen. Gorton gerrymandered boundaries to include the future house of a secretly liberal political unknown with a possibly fake business and backstory, so Rep. Kevin Parker and future Spokane County Republican chair Ben Oakley could recruit him to run against Rep. Matt Shea, while refusing to endorse or support the challenger publicly.

“It’s all conspiracy!” Arritola texts. “So easy to prove wrong.”