Spokane Police Ombudsman Tim Burns confirmed today he plans to retire from his police oversight position with the city just weeks after the newly seated ombudsman commission voted to extend his contract. Burns says his last day will be Jan. 2, but he hopes to provide continued advice or insight as the commission selects a replacement.

“Hopefully with my departure there won’t be too many loose ends,” Burns says, noting the new commission will have several large issues to take on in the coming months. 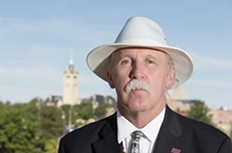 Burns, a former police officer and community developer, has served as the city’s first police ombudsman for more than five years. He has provided civilian oversight of the Spokane Police Department through a tumultuous period of community distrust and reform.

When the city seated the Office of Police Ombudsman Commission, the five members moved to quickly consider extending Burns’ contract. The commission cited his experience and community rapport in its 4-1 decision to extend his contract an additional three years.

During the time of the commission’s deliberation, Burns says, he applied to several other jobs and has now accepted a position that takes him back to community development in California. He says taking the new positions allows him more time to spend with his family.

In the meantime, Burns says he plans to spend the next couple of weeks helping the OPO Commission prioritize the issues before it, including the search for a new ombudsman. He plans to brief the commission on what he has learned and what skills he believes would be valuable.

“I want to be a resource for them,” he says. “Just because I’m leaving doesn’t mean I won’t make myself available.”

The OPO Commission will have its next meeting at 5:30 pm Wednesday in the City Council Briefing Room. Burns says he expects his departure to be discussed during that session.

THIS WEEKEND IN MUSIC: Flogging Molly and Ugly Sweater Christmas

CAT FRIDAY: The best gifts of 2014 for the cats in your life