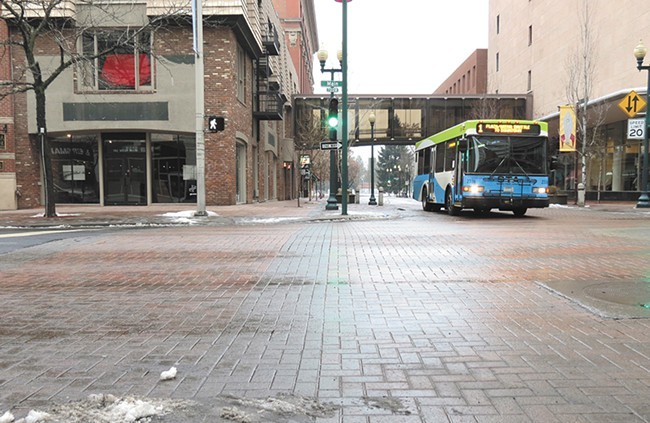 During a study session held yesterday afternoon, members of city council seemed open to a key request from a national retailer that’s interested in setting up shop in downtown Spokane. But before they signed off, council members had a few conditions of their own.

The Downtown Spokane Partnership is currently courting a large retailer to move into a property on the Northwest corner of Main and Wall streets. No one will say who the retailer is, but one of the company’s requirements before any deal is sealed is that the city to vacate 17 feet of the public right of way on Wall Street.

At the session, DSP President Mark Richard said that he’s heard “excellent feedback” from nearby property owners about the new prospective tenant. Council President Ben Stuckart went further saying that the project was “very, very important to the stability of downtown.”

The Spokane Transit Authority is planning on using Wall Street for the route of its Central City Line. Although the vacation being requested by the prospective retailer wouldn’t interfere with the the STA’s plans, Stuckart said that he wanted an agreement that clarified that the project would not impede bus access.

Richard said he was “90 percent” certain the project would go forward and hoped to submit an application for vacation of the public-right-of-way by February.

Chili, beers and bulls to start the weekend