This evening, the Peace Corps visits Gonzaga University to honor and celebrate the school's top ranking for Peace Corps volunteers.

As a part of a Peace Corps Week event, the humanitarian organization's associate director, Helen Lowman, heads to campus to thank Gonzaga for its consistently high involvement in the program, as well as to discuss the strong partnership that has formed between the two groups. 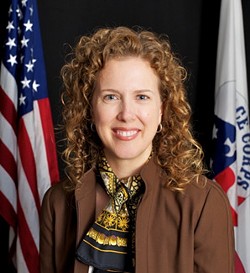 Peace Corps Associate Director Helen Lowman is in town to recognize Gonzaga's efforts in the program.

Gonzaga has been in the top five in the Small Colleges and Universities category (schools with less than 5,000 undergraduate students) for the last five years, and has been in the No. 1 spot for the last three. Gonzaga has consistently had more than 20 undergraduate alumni participate in the program, while the runners-up in the category hardly ever reach the 20 mark.

During 2014, 20 Gonzaga alumni volunteered with Peace Corps, and since its founding in 1961, GU has sent 330 alumni. These high numbers are in part thanks to a Peace Corps Master's International program that exists at Gonzaga through the Teaching English as a Second Language (TESL) program. In this program, recently graduated students can earn a masters degree in TESL and Studies in Language and Culture by spending two full years in a classroom setting to build a foundation in these two areas, and then finish up by serving 27 months as a Peace Corps volunteer.