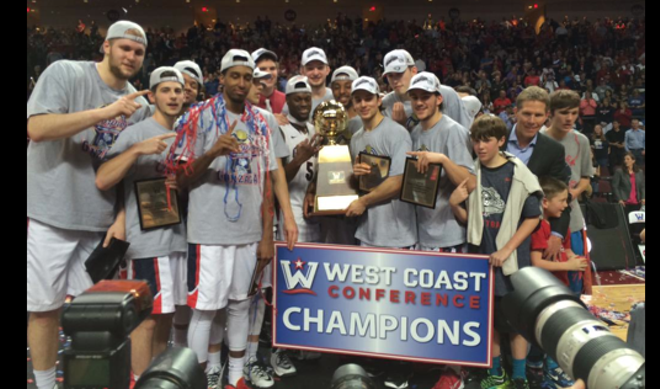 Gonzaga Athletics
This week, Howie Stalwick is Our Man in Vegas, reporting back to you about all the goings on at the West Coast Conference tournament.

By game’s end, it was difficult to determine who was more exhausted: The players, the fans or the scoreboard operator. Gonzaga’s players, accustomed as they are to winning, summoned enough energy to celebrate with one another and their Zag Nut fans as confetti rained down on the Bulldogs after they won the West Coast Conference tournament for the third straight year.
“It was just a great basketball game, played with a lot of possessions,” Gonzaga coach Mark Few said after an impressive 91-75 win. “A lot of heart showed by both teams.

“I’m ecstatic for our guys. We got back to playing the way we play, the way we played the majority of the season, which is attacking on offense and tough as nails on defense.”

The Gonzaga team that wobbled a bit late in the regular season looked very much like a national championship contender against BYU. The Cougars played gamely and well, but Gonzaga played superbly before a raucous sellout crowd of 8,585. As usual, the crowd consisted largely of Gonzaga fans, many of whom make the trip to Las Vegas every year for the tournament.

“To see that kind of support is inspiring,” Few told fans after the game.

THE WAIT BEGINS
The seventh-ranked Bulldogs (32-2) won’t know until Sunday afternoon where they’re playing, how high they’re seeded or who they’ll open against in the NCAA tournament. The smart money has the Bulldogs drawing a No. 2 seed and opening in Seattle or Portland. It’s the 17th consecutive trip to the Big Dance for Gonzaga, a truly remarkable accomplishment for a program that not all that long ago was scheduling the likes of Whitman, Western Montana and Eastern Oregon.

THE BIG MAN
Kyle Wiltjer, the 6-foot-10 transfer from Kentucky, led the Bulldogs with 18 points and 10 rebounds. He was voted Most Outstanding Player of the tournament, but he seemed much more excited about reaping revenge on the BYU squad that snapped Gonzaga’s 22-game winning streak on Feb. 28. “Because we lost, we kind of had a little edge,” Wiltjer said. “We really wanted to prove ourselves against this team.”

THE BIG MEN
BYU ranked second in scoring but 302nd (among 345 Division I teams) in points allowed and fouls committed. The Bulldogs took advantage of BYU’s weak points by relentlessly pounding the ball inside to 7-foot-1 Przemek Karnowski, 6-10 Domantas Sabonis and Wiltjer. “We have a lot of strengths,” Few said, “but at the end of the day, our 'bigs’ are what separates us nationally.”

THE COMPLIMENTS FLOW
Wiltjer, one of 15 finalists for the John Wooden Award as college player of the year, drew lofty praise from coaches on both sides. “He’s so skilled,” BYU’s Dave Rose said. “He’s got great size, so the matchups are a problem.” As for Few, he said, “He’s been everything to the program. He embodies what this program is all about … he’s an incredible teammate.”

THE UNSUNG HERO
Six Bulldogs scored in double figures, including Kyle Dranginis. The redshirt junior guard from the basketball hotbed of Nampa, Idaho, came off the bench to give the Bulldogs 10 points, two assists, two steals, two blocked shots and one rebound in 24 minutes. He also teamed up with master defender Gary Bell Jr. to help limit Haws, the nation’s third-leading scorer, to 15 points on 6-for-14 shooting. “He can do a lot of things,” Few said of Dranginis. “He’s kind of a Swiss army knife guy.”

THE CLEVER ONE
Wiltjer played on Kentucky’s national champions as a freshman in 2011-12. Asked if the Bulldogs could win a championship this year, Wiltjer coyly replied, “Yeah – we just got one.”

What a feeling! I love winning!! #Zags pic.twitter.com/5bQJ0FkvkT

The question is whether Gonzaga can cut down another set of nets. pic.twitter.com/Bs3Ys60Cvj

A skate park party and That 1 Guy