Scathing report confirms what a disaster Idaho’s Schoolnet is 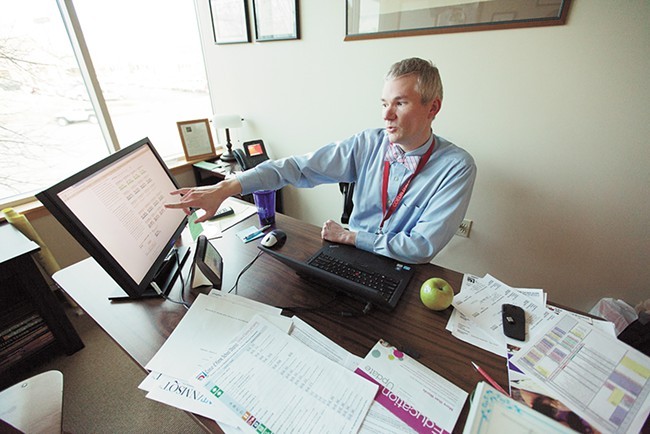 Last year, the Inlander took a look at Schoolnet, Idaho’s statewide “instructional management system” that was intended to allow schools to seamlessly share tests, lesson plans and student data across the state. But in reality, teachers reported, it was glitch-prone, poorly organized and excruciatingly slow.

"It became too slow for us to use," said Mike Nelson, the Coeur d’Alene School District's director of curriculum and assessment. “If you were going to offer your own test, a 20-minute test would probably take you up to two hours or three hours to create."

This a week, a report from the state’s Office of Performance Evaluations laid out just how much the system had failed. From the very beginning, it’s pretty brutal:

This evaluation report concludes that poor management, poor decisions, and poor system functionality compounded themselves and prevented the goals for a statewide instructional management system from being realized. The net result is that the project has sunk costs of about $61 million, and the Department of Education and the Legislature are left with few options to consider when deciding the future of the program.

To anyone following the issue, the dismal grade is not surprising. But this report digs deeper, explaining the problems went beyond technical difficulties, and began long before a vendor was even selected. Much of the blame is laid at the feet of Idaho Department of Education, which appeared to have ignored concerns raised, from the start, by multiple groups. Grant funding proposals received dismal scores, highlighting “unrealistic or overly ambitious goals” and “a lack of detail, evidence, discussion, or comprehensive information about implementation of its proposals.”

Undaunted, the department pushed forward without making serious efforts to reconsider its plan in light of the issues raised in the three rejected funding proposals.

When the designer of the system, a small company called Schoolnet until it was purchased by educational supergiant Pearson in 2011, failed to design the system the state had in mind, the report says, the department failed to hold the designers accountable.

The vendor should share responsibility for the functionality challenges experienced by districts. However, it was the department’s responsibility to verify the potential vendor’s capabilities before signing a contract and to hold the vendor responsible for contract performance.

Additionally, the department had entered into a limited scope contract in 2010, which should have been an excellent opportunity to further evaluate vendor capabilities, assess project risk, and identify any problems Pearson might have in meeting contract deliverables. Instead, in 2011 the department proceeded to expand the contract from $900,000 to $10 million.

Not only that, but the Idaho Department of Education handed over access of the buggy product to every district in state during the pilot phase, while only giving technical support to the handful of official pilot districts. Finally, in December 2012, the department demanded a slew of improvements from Pearson by June 30, 2013. But when the deadline passed, multiple problems still remained. The J.A. and Kathryn Albertson Foundation, a big funder and major heavyweight in Idaho education, was so unsatisfied, it terminated its grant funding for the project.

The department minimized the significance of implementation problems, which left policymakers and the foundation with reassurances that Schoolnet was useful to districts. In presentations to the Senate and House Education committees, the department did not acknowledge challenges with Schoolnet until the 2014 session when legislators began questioning the success of the project. The department reported that it and Pearson developed a work plan in response to feedback from pilot districts. In actuality, the work plan was a result of the [Institute for Evidence-Based Change’s] review, which was commissioned by the foundation. Additionally, in our interviews, the foundation expressed that the department’s portrayal of the project as it progressed appeared to be misleading.

As the report continues, it says the department should have known that the Schoolnet software was only designed for the district level, and it had never been linked up with a statewide student-data tracking system. When Pearson purchased Schoolnet in 2011, the department struggled to communicate and get feedback from the massive corporation.

Pearson was a much larger company than Schoolnet, and the department said that the new company did not prioritize the department’s project or needs.

The constant change in oversight over the system didn’t help matters any. And the department hadn’t designed any meaningful ways to measure whether they were succeeding.

The department relies on login data as its primary metric for use, but login data has many limitations and does not give a complete picture of how districts use the many modules and tools within the Schoolnet platform.

The department hosts Schoolnet currently, but for this fiscal year, the Idaho legislature handed over funds to districts spend on other instructional management system. It was a recognition of the problems, but also a kind of surrender.

This decision did not change the cost of maintaining and hosting Schoolnet inhouse, but it potentially influenced the number of districts willing to continue using Schoolnet when state funds were made available for an alternative system — thereby decreasing the value of a single statewide system.

That $61 million already spent? It’s already gone, the report says, and shouldn’t be considered when planning Schoolnet’s future. And a March 19 letter from Pete Koehler, interim chief deputy of the Idaho Department of Education argues the idea was naive from the start. Great educators experiment, he argued. They’re not tied to a single system.

“In conclusion, there is not and will never be a software solution that will be adopted by all districts and all teachers in the great state of Idaho,” Koehler wrote.

Former state superintendent Tom Luna had defined himself by wanting to transform education with technology – by giving every student access to a laptop, for example. But with the Schoolnet debacle, and the legal issues with the equally disastrous statewide broadband network, Luna’s technological legacy seems more like one of major glitches caused, in part, by user error.