Six things I learned at Sasquatch!

Laura Johnson
Father John Misty should come dance in Spokane soon.
We are now back to our regularly scheduled program. This morning, thousands of music fans exited the Gorge Amphitheater campgrounds after yet another year at Sasquatch! music  festival. They are sunburned, sore, most likely hungover and will need to shower at least twice to get all the grime off. Many of them are headed straight to work today.

As always, it was worth it. Here are six things learned at Sasquatch! 2015.

6. Father John Misty and St. Vincent should do a show together and just dance
These two put on some of the best shows of the whole festival. Saturday night, Father John Misty (aka Joshua Tillman) flung himself around stage in what was almost a parody of rock star dance moves. His depressive tunes rocked harder than expected and he flailed around with great flair (and to great applause). Meanwhile, St. Vincent (aka Annie Clark) took over the main stage on Sunday and never let go. Her dance moves included a lot of shuffling around the stage like a robot and bobbing her guitar back and forth. At the end of the set she crowd-surfed, got back on stage and fell over, as if the audience had killed her. So dramatic, both of them. They should collaborate immediately.

Laura Johnson
Sasquatch! 2015 festival goers getting into their best Warrior Three yoga position Saturday morning.
5. Kids are capable of paying respect to Robert Plant
There was this small worry (on my part) that people wouldn’t show up for his set. Thankfully, even if kids just barely old enough to drink don’t know who Robert Plant is, they are familiar with Led Zeppelin. Closing out the main stage Sunday night, more people stuck around for the whole show than for Sleater-Kinney or Modest Mouse the nights prior. Anytime the 66-year-old legend left his jambandy solo work for a Zeppelin song with his still-strong voice, the venue sung every word.

4. Sasquatch! is for lovers … and fighters
The general “love” was in the air for most of the festival — couples making out in the grass, or holding each other while swaying to the music (also a discovery of multiple pairs of underwear in a porta-potty). But there were also the unfortunate bursts of outrage that made passers-by incredibly uncomfortable. Girlfriends drunkenly yelling at boyfriends, “You don’t respect me! Do you know everything I do for you?” It makes a person wonder if Sasquatch! is a place for the single or those who left their significant other at home.


3. Lana Del Rey can smile
For the most part, Lana Del Rey plays the sexy vixen. She combines her sultry alto vocals with an immobile face, giving her the air of one who is perpetually stoned. But Sunday night on the main stage, when she was sitting down and smoking, she allowed herself to smile in between songs. She let the crowd sing the choruses of her big hits and seemed to relish their recognition. Another note to the dude tripping balls next to me during this set, nobody wants to jump and scream with you right now. This isn't the right music for that.

2. The rumor mill can get out of control
“Did you hear someone died? Did you hear 10 people had to go the ER?” The rumors were flying this weekend, which is understandable with so many folks in one space. Here’s what actually happened: Saturday morning, a 19-year-old man got in his car parked at the campsite and preceded to hit other cars and tents injuring three people and himself.

1. Sasquatch! should be three days instead of four
Three days is the perfect amount of time to go all out, but still have all of Monday of Memorial Day Weekend to drive home and sleep, shower and eat a real meal. Four days is pushing it. Four days is brutal. And of course, Sasquatch! schedules some of the best acts on Monday night to entice folks to stay (Tame Impala, Ryan Adams, Kendrick Lamar). Let’s petition for three days for next year. 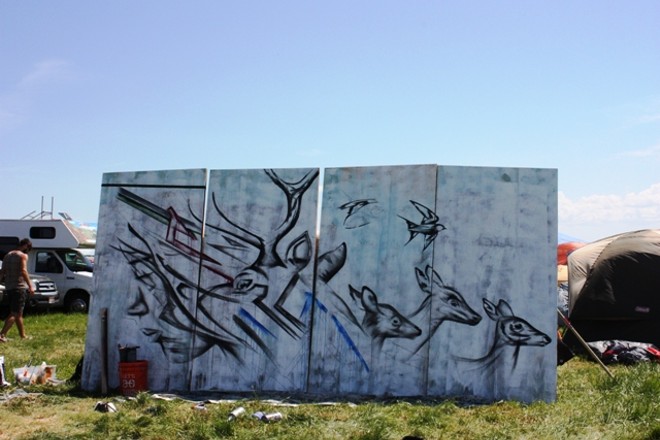 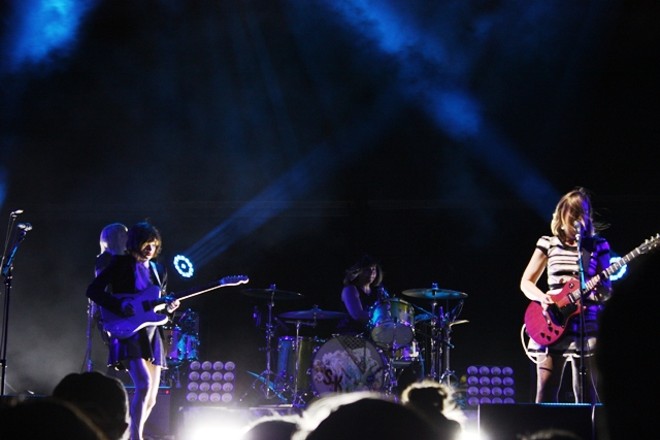 Laura Johnson
After kicking off their tour in Spokane earlier this year, Sleater-Kinney showed Sasquatch! they still know how to rock hard.

MB: The wars against ISIS, street racing, and Snake People

Life is Beautiful, alt-metal at The Pin and philatelists of all stripes gather