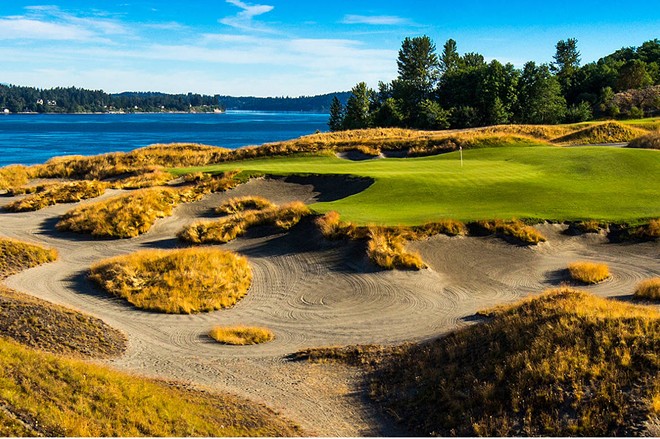 Chambers Bay hosts the U.S. Open for the first time ever.

Never in the 115-year-old history of the U.S. Open has the event come to the Pacific Northwest. But today, the world’s best golfers have already begun teeing off at Chambers Bay public golf course near Tacoma for the chance at the $10 million purse.

All the big names are there for the four-day event — including old man Phil Mickelson and sucking-it-up-right-now Tiger Woods — but as no one is familiar with this essentially treeless venue (the tricky course only opened in 2007) it could be anyone’s game. Ticket prices of course are ludicrous, but for those who are used to watching on TV this is the time to get over there. Who knows when it will be here again? The last time a major golf tournament came through the area was the 1998 PGA Championships.

Also new this year, people are allowed to bring marijuana to the U.S. Open — perhaps making the proceedings a little less boring (come on, golf is somewhat boring). Water bottles though, you’ll have to throw away before entering. 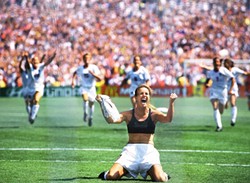 Robert Beck/SI
The iconic photo of Brandi Chastain after the U.S. women's team last won the World Cup back in 1999.
The other huge sporting event happening in the PNW is the Women’s World Cup in Canada. The American women’s soccer team kicks ass at winning Olympic gold medals, taking the last three. But when it comes to the World Cup, they haven’t won since 1999. Having come out victorious in Group D Tuesday night with a 1-0 win over Nigeria at BC Place Stadium, the soccer team is guaranteed one more game — rolling to Edmonton next week to play Columbia during the Round of 16. For those strong drivers among us, that is a little more than 10 hours from Spokane.

While matches are being held all over Canada, on Sunday, July 5 the two final teams spar off in Vancouver, B.C., just six hours away from Spokane. Hopefully this year, the American team will be there too. This isn't the first time the PNW has hosted the Women's World Cup, play took place in Portland during the 1999 and 2003 Cups.

Regardless of your sports fanaticism level, admit that it's cool two world sporting events are happening in our region right now. Golf claps all around.

For those of us who aren’t about to trek over the mountains, here’s where to watch on the good ol’ flat screen: Women’s World Cup – played on FOX, FOX Sports 1 and FOX Sports 2, and is the first time in history a network has resolved to show every single match of the month-long World Cup, male or female.
U.S. Open – online streams begin at 10:30 am, otherwise noon on FOX Sports 1