Does anyone in Montana actually live in a tipi? Another Dolezal claim explored


Among the many red flags in Rachel Dolezal's backstory was the whole birth-in-a-tipi-in-Montana thing. There was a time when tipis made a lot of sense. "The original tipis were ingenious," says Nick Mann, resident Crow Indian aficionado for the Billings Chamber of Commerce. "They were extremely mobile, broke down in an hour, were easy to transport and had flaps so you could control the air coming in."

Tipis still do make sense for glampers, reenactors and the like. But no one, including Native Americans from the plains region —- the only place Indians lived in tipis —- lives in tipis today. And they haven’t in a long time, Mann says.

Living in a tipi may not give you cred on the rez these days, but many Crow do still own tipis. "When you drive past the houses on the Crow reservation, you’ll see a dozen tipi poles leaned up against each house," says Mann. You, too, can own a tipi. And in modern America, owning and sleeping occasionally in a tipi seems to be about the closest anyone gets to calling one of these conical tents home.

Things to do with tipis:

Make your own tipi: you don’t need to kill a buffalo, skin it and tan the hide; Mann says the Crow swapped skins for canvas over a century ago when the white settlers showed up looking to trade.

Here’s a comprehensive tipi-building resource; this is good, too, and simpler.

Of course, you could always buy a tipi: Tipis are available for purchase. Pottery Barn's whimsical indoor option enables kids to "create an imaginative world all their own inside this special play place made just for them. Designed after a traditional Native American teepee, it makes a terrific tent for sleepovers". The gray-fabric covered tipi will set you back $249 and give your kids a legitimate claim to the whole "I grew up in a tipi" thing. ("So what if it was in my living room?")

For just $329.95, though, you can be the proud owner of an amazingly authentic looking Sioux-style tipi from Vermont's Barre. You'll have to cut your own poles and assemble everything, but if the finished tipi even remotely resembles the photos on their site, it's a worthy pursuit for the serious tipi lover.

Rent a tipi: There are a couple places you can go and rent a tipi for a night or two. Airbnb is the easiest place to go to compare tipis, just enter your location and select "tipi" from the lengthy menu of house types. Some are in people's backyards, some are along rivers and some are in traditional encampments. Near Montana's Glacier National Park, the Lodgepole Gallery and Tipi Village is a semi-permanent encampment of tipis sprawled on the prairie of the Blackfeet Indian Reservation. Visitors are welcome from May through September, but if you're going to go the time to do it is July 9 through 12 when the North American Indian Days cultural celebration happens. Darrell Norman, an enrolled member of the Southern Blackfeet, is in charge of the tipi village and says his people haven't lived in tipis in a very long time.

Gaze at 1,000 tipis spread across the Montana plains: From August 14 through 16, a sea of tipis will dot the plains of the Crow reservation as Crow tribe members return to their ancestral grounds to celebrate Crow Fair 2015.

"It’s still a tradition to give tipis as wedding gifts; symbolically, you're giving the newly weds a home of their own," says Mann.

Mann says the Crow stopped living in tipis not long after 1884 when the Chief Plenty Coups built a two-story home to transition his people from the plains lifestyle to ranching. The home is still standing  and is surrounded by Chief Plenty Coups State Park on the Crow Reservation not far from Billings.

Contrary to ideas one might get from Billing's tourism ads, which feature photos of ceremonial (not intended for occupancy) tipis at the Little Bighorn Battlefield National Monument, there are no tipi dwellings in Billings.

"I chatted with some of our tourism reps and as we know dwelling in teepees is very rare in Montana," says Visit Billings Leisure Marketing Manager Kelly McCandless. So she's not ruling out tipi dwelling entirely.

Window Dressing art installations are coming to the Ridpath 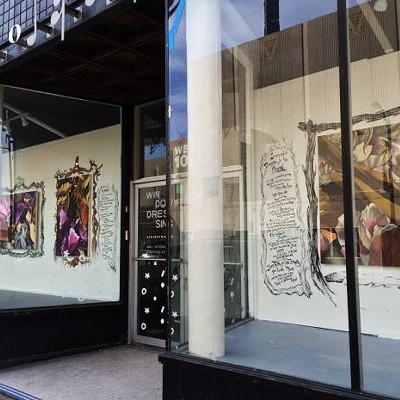