Who are Spokane's 10 thirstiest water users? 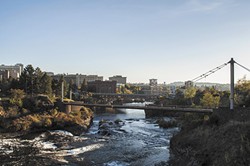 With Washington facing a historic drought, the city of Spokane is asking residents to cut back on their use of water. The city gets its water from the Spokane Valley-Rathdrum Prairie aquifer, and during the heatwave in June it was pumped at record level. The Spokane River relies on water flowing from the aquifer. And because of low snow packs and all this pumping, it’s reached historic lows.

“We [water consumers] believe that it’s inexhaustible,” says John Osborn, a local conservationist who recently launched the H2KNOW campaign that’s also partnered with the city to encourage residents to be more thoughtful in their water use. “People beleive that there is no limit to the amount of water and we have a water rate structure that encourages waste, so is it any surprise that we continue to use more and more water?”

The typical Spokanite uses 20 cubic units of water annually, with every unit being the equivalent to 748 gallons of water, according to city spokesperson Marlene Feist, which pencils out to about 15,000 gallons of water.

The Inlander decided to look into who are the heaviest residential and institutional users of water in Spokane. The names of residential users are shielded from disclosure under the state’s public records, but the top residential user guzzled 3,110 cubic units of water, or 2,326,280 gallons of water.

“Each of these institutions needs to take action to review and reduce its water use, and recognize that they have a civic leadership duty in doing so,” says Osborn.

Spokane’s municipal government is asking residents to “Slow the Flow” by not watering lawns during heat of the day, not running the hose needlessly and even undergoing an irrigation audit. Spokane’s municipal government is also its own largest consumer of water. City Spokesperson Feist says the city has multiple water-use accounts. But the one that topped all others was for the city’s wastewater treatment plant, which treats and returns cleaned water to the Spokane River. Cleaning that water, says Feist, requires water.

“It’s just part of the process of managing the wastewater,” she says. “You have to thin it down.”

“We are like a small city,” says Mary Joan Hahn, spokesperson for the university, of the housing, dining and athletic facilities all contained within Spokane’s largest institution of higher education. “So there is just a lot of need for water.”

Hahn says that 2,800 students live on campus in nearly a million square feet of residential facilities. Gonzaga works hard to conserve water, she says, using low-flow sinks and toilets as well as a computer system to manage irrigation. “We’re working hard on decreasing our use of water,” she says. “But we have a big operation.”

Liz DeRuyter, the hospital’s spokesperson, notes in an email that the 2-million-square-foot campus is also like a “small city” within a city that provides services for thousands of patients and visitors each day, as well as 3,000 employees.

“Providence has a long history of working to reduce its environmental footprint,” she writes. “Its Green Team – made up of employees throughout the organization – focuses on good stewardship and sustainability of natural resources. Water usage is tracked on a monthly basis to quickly identify and repair leaks and properly maintain equipment that uses large quantities of water, such as the heating/cooling system. Conservation initiatives have included motion sensors on sinks to reduce water usage and low-flow flush valves in restrooms.”

The company, which describes itself as “one of the world’s largest suppliers of technologically advanced aerospace and defense products,” didn’t respond to a call for comment.

Spokane Parks and Recreation Department operates four water-guzzling golf courses, the thirstiest of which is the Qualchan Golf Course. Monique Cotton, department spokesperson, writes in an email that the city is looking into improving irrigation systems and addressing leakage in water distribution systems.

“We certainly recognize there is room for research and improvement to our water consumption and use techniques and are taking the steps necessary to make these improvements,” she writes in an email. “Our Water Department and the Parks Department are teaming up to identify projects — ones that we can do immediately and others that will take a little longer but have a greater impact.

Hollister-Stier Labs, a maker of pharmaceuticals, didn’t respond to a request for comment.

San Souci West is a gated community that bills itself as a “living modular home park designed for the 55 [and] over crowd.” Duke Pappenheim, manager of San Souci, says that some of the amenities that come with living in the park use a lot of water, such as the sauna, which uses 1,500 gallons of water a month. There’s also the swimming pool, which is filled with 40,000 gallons of water a year. But the biggest use of water, he says, is probably watering lawns.

The company appears to own real estate. It did not return a call seeking comment.

Carolyn Casey, the public information officer for the college, notes in an email that Spokane Falls Community College is 127 acres, much of which is covered in grass and requires routine landscaping and watering.

“There are many efforts underway across Community Colleges of Spokane to reduce water usage and energy consumption,” writes Casey in an email. “All recent buildings are built to meet either a LEED gold or silver status. Also, rain sensors have been installed in many of the irrigation systems so that watering cycles are adjusted when we do have precipitation. When landscaping is updated, we are using more gravel and decorative rock treatments as well as drought-resistant plants so that less watering is needed in those areas.”