This week, a controversy over whether Shaun King, a prominent Black Lives Matter activist, was actually white bubbled up, resulting in him giving this explanation to the Daily Kox. It also meant former Spokane NAACP president Rachel Dolezal was once again the subject of national conversation.

Recently, the Inlander obtained police images of the alleged "death threat" package that Dolezal supposedly received earlier this year in the NAACP's P.O. box. Since then, local media outlets have raised questions about the veracity of the threats after the revelation that there was no postmark on the letter, making it unlikely it was sent through the mail.

For one, does the letter actually contain death threats against Dolezal?

There's no question the contents are racist and include many references to lynchings, race wars and shooting black people. But as a death threat letter, it's a strange one. It only mentions Dolezal on one page and never threatens her personally.

Hate speech is constitutionally protected. "True threats" are not.

So is this constitutionally protected free speech? Is it a "true threat?" And if it was meant as a specific threat against Dolezal, why include all that stuff about the Richmond refinery explosion, Chris Kyle, military benefits and illegal immigration visas? And why did a subsequent letter appear to apologize to Dolezal?

And if the entire thing was faked by Dolezal, as has been suggested, why would she include all the stuff about California? Why wouldn't she make it clearer that the letter was meant as a death threat? And why would she subsequently send a letter to herself, with an Oakland postmark, apologizing to herself for causing herself grief, and then pretend that letter was yet another death threat?

1. Note the lack of postmark on the stamp that ended up drawing a lot of skepticism. The 2014 4th of July forever stamp is the same type of stamp used on subsequent messages, postmarked from Oakland, California, ostensibly also received by Dolezal. The envelope itself appears to be inscribed in pen, while the contents inside are inscribed with both pen and marker.

2. The "No More Hesitation" pictures, appearing to point a gun at the viewer, are from this set of law enforcement targets that made a stir back in January. For more information on the Zebra Killings, read this LA Times article.

3.  Norman Thomas never said that quote. The second quote is from a "New World Order" conspiracy book. And that quote supposedly from Voltaire? Probably came from a white supremacist instead.

4. Another California-based article, this one from SF Examiner about then-attorney-general Eric Holder. The "Come and Take It" graphic with the gun appears to be a targeted web ad that appeared alongside the story rather than something placed there intentionally by "War Pig" or the author of the article.

5. The SF article continues, with arguably the most threatening message at the bottom (though Dolezal herself is not mentioned.) "Necktie Party" is an idiom that has historically referred to lynchings and executions.

6. The Shorty Belton graphic is a familiar one in Spokane. The article below is a piece available at Down Trend by a guy named V. Saxena ("a proud conservative who originally started out as a radical Ed-Schultz-loving Leftist loon").

7. The "NAACP prez has her panties in a twist" article appears to be a dead link.
click to enlarge

8. The full text of this article, again focused on California, can be found here.

9. Here are the links to the Breitbart story (again about California) and a political cartoon.

10. One of the few original rants from War Pig applauds the Contra Costa County Deputy Sheriffs Association, for fighting against a pay increase for county supervisors. It also angrily laments the impact of retirement-benefits cuts on the military.

11. A Washington Post article, posted by the Pittsburgh Tribune, on the aforementioned military-benefits cuts.

12. A Google search for "ignorant, trigger happy rednecks" results in a few hits, but none relating to the Bundy ranch or the Alamo. Here's a link to the conspiracy theory about special forces during Hurricane Katrina. "NWO" typically stands for New World Order, either a conspiracy-theory or a pro-wrestling group.

13. A Dallas Observer story about the Texas governor honoring the man American Sniper was based on. 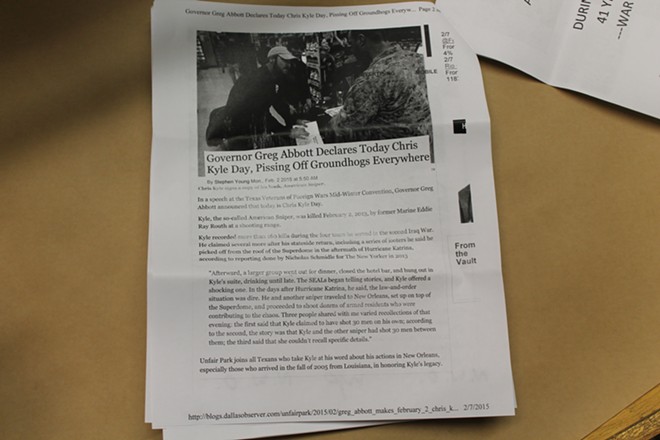 14.  Again, an attack against a California politician. This also includes the first of many lynching photos from "Without Sanctuary" a collection of photographs showing the stark ugliness of historical lynching.

15. More lynching photos from without sanctuary. "Knockout 101" may be a reference to the so-called "Knockout game," a supposed trend of sucker punching strangers that made its way around the media in 2013. Or it may just be celebrating lynching.

16.  A reference to an oil refinery explosion in Richmond, California, in 2012.

17. A story from National Public Radio about the use of black mug shots for target practice. The "Hey man, nice shot" comment from War Pig appears to celebrate violence against black people. It is also a "1995 single by the industrial rock band Filter."

18. This appears to be an article from the American Free Press, a publication known for spreading anti-Semitic conspiracy theories. You can find the text here.

How to help wildfire victims across the Inland Northwest

If you MUST live on minimum wage, Spokane's a great place to do it