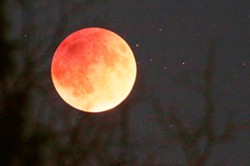 Young Kwak
Sunday night's super moon lunar eclipse, aka super blood moon.
Last night, many gazed upon a coppery supermoon lunar eclipse.
According to NASA, the last supermoon/total lunar eclipse occurred in 1982 and you’ll have to wait until 2033 to see another. (Spokesman-Review)

Shell calls it quits on Alaska drilling.
Just weeks after Shell won approval to fully drill a well in Alaska’s Arctic waters, and spending billions in the process, the company has decided to move on, citing expense, regulations and insufficient amounts of oil and gas.

President Obama blasts Putin ahead of the first formal sit-down the pair have had in two years.
In a speech at the U.N. General Assembly this morning, President Obama had harsh words for Russia regarding Syria and Ukraine. Naturally, Putin got his say on 60 Minutes with Charlie Rose Sunday night. Things are starting off well.