Want to get parents angry? Talk about "Common Core" math.

When KHQ told viewers that they were "looking into how Common Core affects your family," the post racked up over 600 shares.

The resulting story this week attempted to explain what KHQ calls "Common Core" math. KHQ reporter Gabe Cohen drew a contrast on a multiplication problem between "how we learned math" and what he sees as a variety of more complicated methods.

"Parents out there, many of them, are only seeing one formula, and it's this," KHQ reporter Gabe Cohen says. He points to the whiteboard. "COMMON CORE = BIG PROBLEMS."

Cohen then talks to a single mom who says the "new math" looks more like a "foreign language." "For so many parents out there, this new method has made homework time a huge headache," Cohen says.

His story repeatedly implies that these methods have only recently appeared in Spokane Public Schools. He introduces a teacher explaining how one method works by saying, "for three years, this bizarre chart has frequented boards here at Lidgerwood Elementary."

But Matthew Henshaw, director of elementary curriculum at Spokane Public Schools, says none of the methods explored in KHQ’s video are new. They’ve been in use in the district for about two decades.

In fact, KHQ gets the trend precisely wrong. The Spokane Public Schools' "Engage New York" curriculum, based on the Common Core standards, have moved the district in the opposite direction as KHQ implies: The new curriculum de-emphasizes the more conceptual style of teaching math (a source of occasional parental confusion) and focuses more extensively on perfecting the traditional "standard algorithms" — the kind of math you learned growing up.

"It’s way more traditional," Gering tells the Inlander. "We teach more standard algorithms now than we did five or 10 years ago."

To be clear, there are many legitimate arguments against Common Core. Some teachers, for example, argue that some of the standards are developmentally inappropriate for kids. Others feel that the standards have meant a loss of local control.

But Common Core has recently become an educational boogeyman, to be blamed for anything in a curriculum, test or assignment that parents don't like. Worksheets and test questions go viral, even in subjects like history that the Common Core standards don't directly address. A lot of times the problem isn't the standard, it's the curriculum supposedly based on the standard.

It's a bit like seeing a blemish on the skin, and blaming the skeleton.

Blaming, or crediting, the Common Core standards for the "new" way of teaching math is simply wrong. In fact, the debate — often called the "Math Wars" — over non-traditional ways of teaching math has been raging for decades.

In one camp, you have proponents of traditional math, where students are taught one way to do things, and then drilled repeatedly on how to do it.

On the other side, you have those advocating for "reform," "constructivism" or "discovery" mathematics. Students are taught a number of different ways to solve a given mathematical problem with the goal of understanding the mechanics behind the math. They may be even be asked to try to figure out how to multiply or do long division before they're taught the traditional method.

The Common Core doesn't require any of the other non-traditional methods specifically, but it does encourage using a few of those methods to give students different ways to solve problems. Students are supposed to understand what's happening when they multiply, add, subtract or divide, but the Common Core standards give districts a lot of flexibility for how to get there.

Here's a relevant summary from the Common Core standards website:


In other words, teachers still may use methods like the "multiplication box" to help kids grasp what's happening when they "carry the one." But Gering says students, once they grasp the general concept, should quickly move on to focusing on perfecting the traditional method.

"Some see it as this new, complicated, 'Common Core," Cohen says in the KHQ report. "But the curriculum hasn't actually changed that much."

In fact, the curriculum has changed. It's become more traditional. Before the Common Core, the district had previously been using "Investigations," a very non-traditional math curriculum. Many parents hated it.

"It was very focused on conceptual understanding," Gering says, "and had less of a focus on procedural skills and fluency."

"Engage New York," the new math curriculum used in Spokane Public Schools, shifts the focus much more toward understanding how to use the traditional method, Gering says. Students practice problems. They work on speed. They drill. And while students still might learn from more conceptual methods, Gering says, teachers shouldn't be assigning that kind of homework if kids don't understand it. 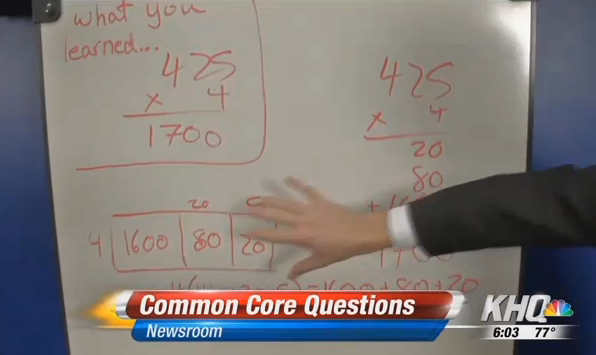 In truth, "what you learned" is still required by the Common Core

CONCERT REVIEW: Neil Young made his own headlines at Spokane Arena