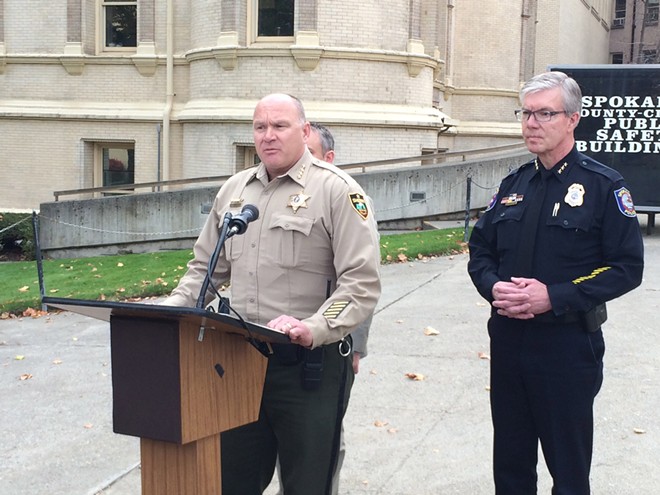 Mitch Ryals
Sheriff Ozzie Knezovich addresses a sexual assault investigation involving a Spokane police sergeant during a press conference on Thursday.
Neither side is changing its story. On the one hand, Spokane County Sheriff Ozzie Knezovich maintains he heard that the city's top administrator, Theresa Sanders, wanted to tone down the language of a press release announcing that a police officer had been accused of a raping a female colleague at a party over the weekend.

"This is the information I was presented," Knezovich says. "And when asked a question, I'm not going to cover for anybody. I'm just not going to do it."

On the other hand, Sanders flat-out denies any wrongdoing.

"Ozzie's remarks are a pure fabrication, and there will in fact be consequences for him perpetuating that lie," she told KHQ Thursday. "I consider it to be an attack on my reputation, and I will take action."

The dispute arose from discussions surrounding language in the news release, which identified Sgt. Gordon Ennis, the officer accused of rape, only as a "sworn employee."

In Knezovich's mind, it should have said: "Spokane police sergeant under investigation for sexual assault on fellow officer." Knezovich adds, "I told them 'if you do this press release wrong, you're going to pay for it all week.'"

Instead, the statement read: "The sworn employee has been placed on paid administrative leave pending the outcome of a criminal investigation involving an alleged sexual assault where the victim was known to the employee."

"We're here to talk about the investigation that the sheriff is conducting," Condon said.

All the kid-friendly Halloween events we know of so far

Funding education, punishing strikes and other things Spokane's school board wants from the Legislature