Funding education, punishing strikes and other things Spokane's school board wants from the Legislature


Each year, school boards across Washington state draft a list of legislative priorities. Such lists can give you a sense for the biggest frustrations and desire of the school boards.
click to enlarge 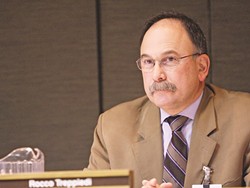 
On Wednesday, the board of directors for Spokane Public Schools finalized their list:

Fund Schools: This is the and a source for a fair amount of weary frustration on the school board. They look at the court rulings in McCleary finding that the legislature still isn't fully funding basic education (the state's "paramount duty" according to its constitution) and say it's time to start.

But precisely how it's funded is an important aspect as well. The board wants to make sure teacher salaries are but based on the market-rate. A teacher in Seattle, in other words, might need a higher salary than a teacher in because the market's radically different in the two cities.

On top of that, the board's also looking for boosting capital funding as well: Smaller class sizes mean the old building setups won't work, so new classrooms need to be built.

Make it easier to pass school bonds: Right now, it takes a 60 percent supermajority from voters to approve school bonds, making it particularly difficult for tax-averse school districts like East Valley to pass bonds. Spokane Public Schools' board wants to lower that threshold to 50 percent-plus-one, making it as easy to pass a bond for school construction as to pass a levy.

Make it easier to fire (or suspend) bad teachers: The state recently implemented a complicated new teacher evaluation system to dig down into teacher performance. Spokane's school board wants a clear, practical way to fire or suspend employees who aren't up to snuff, but also give them due process and a way to appeal their termination.

Use test scores (as part) of teacher evaluations: This is a controversial one, and an issue that continues to divide the legislature.  Teachers unions hate the idea of using standardized test scores at all in evaluations. But the federal government wants the improvement (or decline) of student test scores to at least be considered.

The school board appears to support that goal, urging the legislature to make sure "multiple student growth and/or value-added assessment measures comprise a portion of a teacher’s performance evaluation."

Protect Spokane's charter schools: This is a priority that's unlikely to be on any other district's because no other district in the state engages with the charter school movement like Spokane. Here, the board proposes a workaround for the recent Supreme Court ruling calling charter schools unconstitutional for not being governed by elected officials. But Spokane International Academy and PRIDE Prep were approved by a board of elected officials: The Spokane Public Schools board of directors. The board hopes the distinction would be enough to allow the two schools to stay open.

Clarify language banning strikes by public employees, and outline fines for those who do strike: Right now, there's no provision in state law allowing for teacher strikes, and many superior court judges in the state have called teacher strikes outright illegal. But there's no provision specifically banning it, either, giving unions a chance to argue that the law is unclear, and pursue strikes anyway. Spokane's school board hates this. It wants the legislature to clarify that strikes by public employees are illegal, and to outline punishments for unions that break the law.

Board member Deana Brower, however, warned that listing strike reform as a legislative priority could be a "conversation stopper" with Democratic legislators.

In the end, the board compromised, keeping the language about strikes in the list of but moving it further down the list.

Here's how the final draft turned out:


The Spokane Public Schools advocates that the legislature should:

C. Levy Reform. Protect local levy capacity and local effort assistance (LEA) for school districts until full funding of basic education is achieved. Any reduction in levy and LEA capacity must coincide with increased state funding for basic education from the McCleary decision.

A. Simple Majority. Allow passage of school bonds with a simple majority vote.

B. Facilities for Lower Class Size. Provide capital funding for districts to have adequate classroom space to implement class size limits established in SHB 2261 and continue funding for state match for school construction projects after local district communities have voted in favor of school bonds.

A. Suspension, Non-renewal, and Termination. Implement a practical and efficient
system for the suspension, non-renewal, or termination of certificated staff who do not meet evaluation criteria to include:

i. Give school districts the opportunity to implement a simplified pre-disciplinary due process (Loudermill) hearing when considering suspension or the termination of an employee (thus allowing pay to be cut-off if terminated), followed in turn by the elaborate disciplinary hearing appeal process already set forth in law and consistent with other public employee groups.

ii. Allow teachers to be removed from the district in a more efficient manner if their performance does not sufficiently improve under the new teacher evaluation process.

iii. Require as part of the statute that multiple student growth and/or value-added assessment measures comprise a portion of a teacher’s performance evaluation.

B. Extension of Deadline for Non-renewal Notice if Budget Not Passed.
Revise the written notice requirement for non-renewal of certificated employee contracts to May 15th or thirty days after the governor signs the budget, whichever is later.

D. Opposition to Strikes by School Employees. Clarify that RCW 41.56.120 applies to all public schools employee, including certificated personnel, and to mandate courts to assess and enforce a civil fine against the local education association for each strike, work stoppage or slowdown endorsed by the association or in which any members of the association engage or participate.

F. Charter Schools. Allow charter schools to operate in a school district if authorized by a public school board.