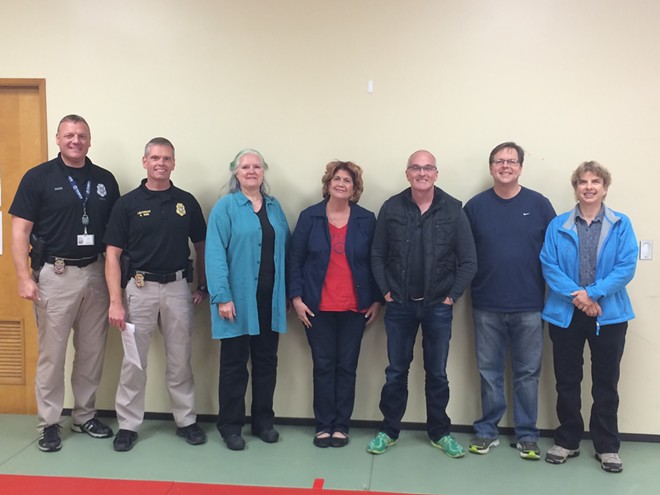 A man was just fired from his job at City Hall. He sits in his pickup in the parking lot but refuses to leave. Another employee calls the police, and as they approach, they can see through the back window that he's pointing a gun at his head. He says he doesn't want to live.

The officers try to talk him down:

"Stick your hands out the window," one says.

"Put the gun down," says the other.

The man doesn't listen. Instead he slowly exits the vehicle. With his back still turned to the officers, he begins to walk into City Hall with the gun still pointed at his head. They warn that if he doesn't stop, they'll have to shoot. By the time they fire, it's too late.

This is the situation Ombudsman Commission Chairwoman Deb Conklin and Marty Huesman, the recently hired office coordinator, experienced at the Spokane Police Academy Wednesday afternoon. Two other members of the citizen commission and Breean Beggs, the commission's attorney, also got a virtual experience in the decisions police officers have to make every day. Conklin and Huseman were wearing body cameras as well.

The lights flip on.

"What happened there?" asks Lt. Kevin King, director of the Spokane Police Academy.

"What was interesting to me is how many shots I took and nothing happened," Conklin says.

"Did anyone disagree with her decision to shoot?" King asks the group.

"Where were you aiming?" asks Ladd Smith, one of the newest commissioners. "That's something I've always wondered. Why can't the police shoot to wound?"

That's a question police officers get asked a lot, King says. But aiming for the leg or arm is extremely difficult. "We teach officers to shoot center mass."

For Jenny Rose, another new member of the commission, the experience was eye-opening despite the fact that her dad and brother were career police officers.

"Some people don't think about the stress officers are under in these situations," she says. "I think I gained a new appreciation for the risk officers take and the stress that comes along with it. You could be trained to the hilt, and you truly don't know what the situations will be until you're in there."

After the virtual training session, commissioners went back into the classroom to watch the body camera video. The Spokane Police Department has 90 body cameras on the streets right now. By next week, they plan to issue 90 more, King says.

"We're training officers to turn them on in the car as soon as they get a call," he says, adding there is not yet an official policy in place for the new devices.

Conklin says she doesn't think videos should be used to catch officers in a lie when they are testifying against a suspect; rather, they're a tool that provides another perspective of police interactions with citizens.

"You want to know what the officer saw, smelled, felt, heard," she says. "All that plays into their decisions."

King agreed and says the debate raises an important point about subjective and objective reality.

"This is possibly the biggest hot topic in the body-camera discussion right now," he says. "It's important to have an investigator take the officer's statement knowing the footage also exists, and be able to marry those points of view."


This post has been updated to clarify Chairwoman Conklin's views.

Legos are taking over the MAC this weekend