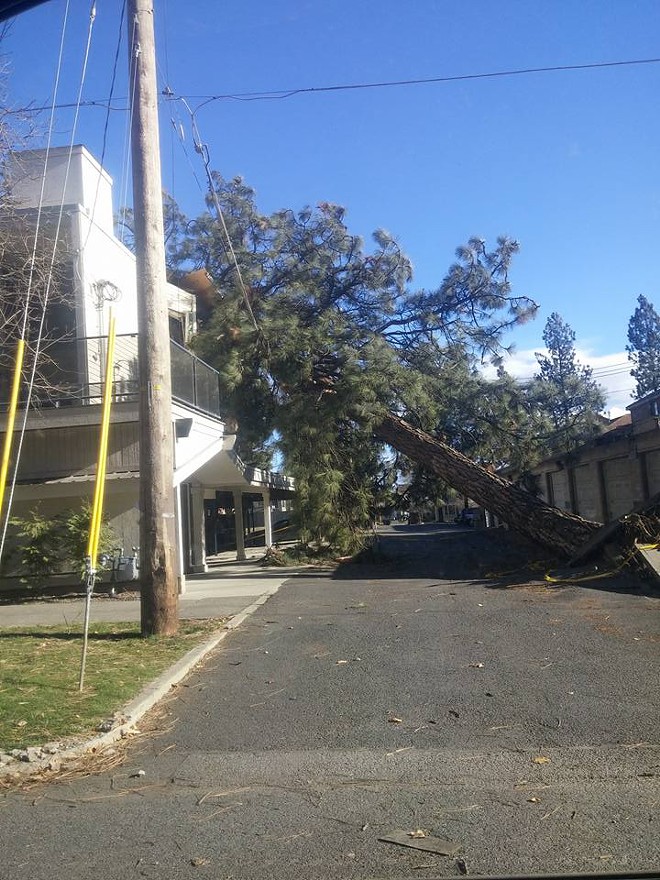 Photo Courtesy of Felicia Diamond
A tree that fell on a condo complex between 3rd and 4th in Browne's Addition across the street from Coeur d'Alene Park.
A windstorm causing record-setting power outages ripped across the Pacific Northwest yesterday with gusts reaching 137 mph in some places. Three people are dead and more than 300,000 people throughout the state lost power at some point since Tuesday.

Currently, 139,000 Avista customers throughout Washington and Idaho are without power, down from 180,000 at the height of the hurricane-force winds. That's more than 30 percent of Avista's customers in the two states. 113,000 of those customers are in Spokane County. The company stated it will be three to five days before most customers get service restarted.

This is the largest crisis in our 126 year history. Our latest update is on our Facebook page. https://t.co/NiNA846UH2

Click here for an outage map and here for a map of the downed trees in Spokane.

Gusts reached up to 137 mph at the Mission Ridge Ski area in Chelan County, according to the National Weather Service. In Spokane, winds topped out at 71 mph; 101 mph in Bonner County, 67 mpg in Kootenai County and 82 mph in Shoshone County.

Temperatures are expected to drop below freezing tonight:
Idaho, Oregon and other power companies throughout Washington:

30,244 Inland Power and Light customers throughout Washington and Idaho are without power.

As of 10 am, Vera Water and Power reported that about 2,000 of its customers were without power.

Kootenai Electric Cooperative is reporting approximately 10,000 customers are without power. The KEC website is telling customers the outages could last a week or more.

About 2,497 Portland General Electric customers are without power.

Keep scrolling for images of the damage: (and click here for a slideshow of Inlander photographer Young Kawk's photos)

This tree snapped off like a twig and crushed this car. A woman was inside at the time. Remarkably she's ok pic.twitter.com/8vwtFsidaJ

The Red Cross has opened a shelter for victim's of Tuesday's windstorm: https://t.co/PgnoSm8KZl #KXLy #InlandWind pic.twitter.com/93LzxxMrMw

As power is restored, here are the stories you may have missed 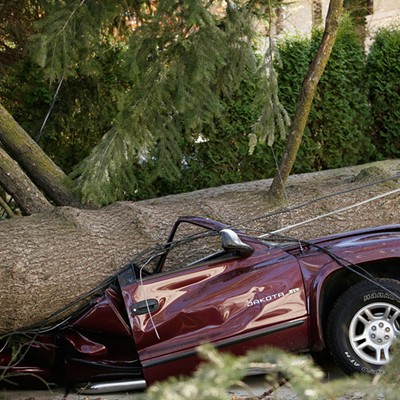