FROM INLANDER.COM
Sen. Patty Murray co-wrote a bill to overhaul the No Child Left Behind law that will give states, rather than the federal government, the authority to decide how to use required math and reading test scores. Obama is expected to sign the bill today after the Senate approved it 85-12. (Seattle Times)

The second season of the popular podcast Serial — released today — explores Sergeant Bowe Bergdahl’s decision to leave his base in 2009 and the five years he spent as a prisoner of the Taliban. Bergdahl was released in a prisoner
click to enlarge 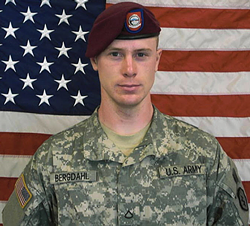 The Bowe Bergdahl story is the subject of the new season of "Serial."
exchange in 2014, and is facing charges of desertion with intent to shirk important or hazardous duty and misbehavior before the enemy — which could result in a life sentence. (The New Yorker)

The ethics complaints against Mayor David Condon continue to roll in. The Spokane Ethics Commission voted yesterday to consolidate a third complaint with two others previously filed. The commission will meet again in January. (Spokesman-Review)

Despite a passionate speech, Chicago Mayor Rahm Emanuel might not escape calls for his resignation. Last night Emanuel took responsibility for the city’s 13-month delay in charging the officer who killed Laquan McDonald and releasing dash cam video. More videos of Chicago police shootings have been released since. Here’s a snapshot. (CNN, New York Times)