Review: Chelsea Does dives into big themes with wit and cynicism 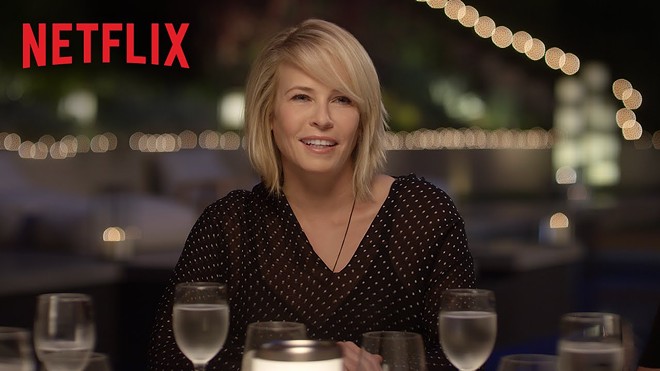 Chelsea Handler stars in four-part Netflix series Chelsea Does.
Chelsea Handler, stretching the bounds of the documentary form, inspects big themes including marriage, technology, racism and drugs in her new four-part Netflix series Chelsea Does with familiar cynicism and dashes of authentic curiosity – but mostly self-obsession. The series is saturated in her earthy and comic brand, though it never fully departs from its serious dimensions.
The only problem is that her style is best described as somewhere in between reality TV and documentary. Expectations are thrown out as fire-breathing Chelsea whiplashes (it is fun at times) the viewer through a unique take on former-comic-TV-host-turns-ruthless-reality-pioneer. So if you watch, hang on, but not too tight.
In the first episode, “Chelsea Does Marriage,” commitment and marriage are put through the wringer. Chelsea goes on blind dates, reunites with a past boyfriend, meets the founder of Ashley Madison, and perhaps too obviously, visits a wedding capital Las Vegas. Feminists will nod in approval when she says to a first date, “You interrupt a lot…I know, but it’s a lot. Like you don’t let me finish my thoughts…I did pause, but that’s not a vote for interruption.” The likelihood of hearing wedding bells soon — or ever — seems unlikely.
Next, Chelsea tackles technology in “Chelsea Does Silicon Valley.” In the opening minutes, she gives Leonardo DiCaprio’s character in Wolf of Wall Street a run for his money with an overabundant use of F-bombs in an attempt to show her frustration with lavish house apparatuses. She later visits Silicon Valley to pitch an app idea designed to get you out of awkward situations —for example, a bad date or boring conversation. This episode is largely skippable unless you have a burning interest in technology or starting your own app.
The first 20 minutes of episode three, “Chelsea Does Racism,” is Chelsea looking in a mirror and telling herself she is the best thing to have happened in comedy. She defends past jokes on her E! show that used racial stereotypes, often giggling, but always using the preset response to criticism: “My whole career is based on making fun of everyone. And some stereotypes are compliments.” The issue is — and it’s a big one — that a white woman talks about how racism affects her, not the people it actually targets.
In the second part of the episode, however, Chelsea brings out her best attempt at being an objective listener and digging reporter. She meets with diverse figures, including Al Sharpton, Native American activists, and Shimon Perez — all authoritative on the topic of racism. She also spoke to white Southern locals, one of whom (dressed in a Confederate soldier costume), in response to Chelsea’s probing questions, said of slavery in the South before the Civil War, “Well, people were taken care of.” Chelsea managed to pull out the preposterous truth and here we have, briefly, the unscripted documentary we were waiting for.
Without a doubt, episode four, “Chelsea Does Drugs,” is the most entertaining of the series. In one scene, Chelsea lights it up with Willie Nelson in his tour bus and makes it clear it isn’t the first time she has inhaled something other than air. The episode is laced with excerpts from a pot-fueled dinner with friends, showing them laugh uncontrollably at trivial comments. It is, however, fun to watch. Later in the episode, addicts share their sad stories with drugs, which feels awkward considering just a scene before, Chelsea was high and laughing.
The substance of the drug episode comes when Chelsea travels with friends to Peru to try a drug called ayahuasca. Glorifying it as (despite diarrhea and vomiting side effects) transformative, she says she wants to be the best version of herself and “anything that is not your regular state of being is mind-expanding.” The first night of trying the drug was unsuccessful, as her two friends had bad trips and she barely felt the drug’s effects. The following night she hired a Shaman guide to administer the liquid drug to her privately – and that time it worked.
After some unsavory vomiting, she cry-laughs thinking about happy childhood memories, and the epiphany she comes to? She's a bully to her sister. "And then I realized, oh, you are so harsh on your sister. I'm a bully to her." The series wraps up with introspection, the catalyst to change. But in Chelsea's case, she uses it to solidify her perspective on life: The world is her oyster. "The only opinion I'm really concerned about is my own. I'm really happy and I love everything I get to do. Why would I take that away from myself?"
She is, after all, queen of confidence. Telling first dates they interrupt too much and smoking marijuana with Willie Nelson on camera are gutsy things to do. But the viewer can only marvel because the participatory journey is lost in a labyrinth of her personal musings that seem answered from the start. 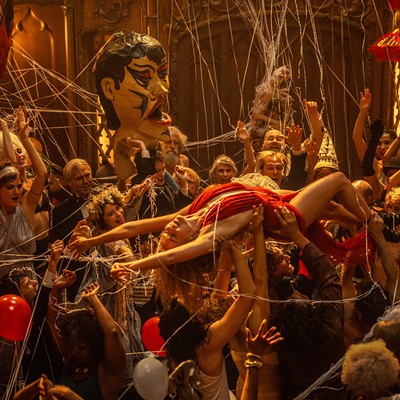