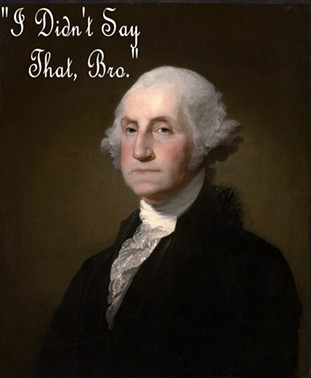 It would do a few things: It would punish public officials with a gross misdemeanor for "denial of firearms civil rights" for illegally confiscating a firearm, denying a concealed weapon permit without a cause, delaying the delivery of a weapon beyond the period specified in state law, or even asking concealed weapon permit applicants for more information than is legally required. It would allow the victim of such a denial of firearms civil rights to sue.

It would also punish lawbreakers with additional prison time for possessing, brandishing, or discharging a weapon during a crime. (That time Rep. Matt Shea got in trouble for brandishing his unlicensed gun during a road rage altercation, he didn't do so in the middle of committing a crime, to be clear, so this wouldn't hurt him.)

But to me, the most interesting part of the bill is the part that would add a length essay to the firearms and dangerous weapons section of Washington state law. And yes, it does include a Hitler reference.

It also includes plenty of quotes from the Founding Fathers. And yet, for all the love espoused by Shea and other co-sponsors of the bill for the Founding Fathers, this bill doesn't bother to quote them accurately. Some of the quotes are mildly incorrect, conflate two different speeches, or are incorrectly attributed. Others are completely invented, apparently lifted off the Internet without bothering to check their accuracy.

This happens a lot.

You can make a case for individual gun rights using early American history. The Supreme Court in Heller did just that. But this ain't it.

Take my hand, fellow history buff, and let's go through the bill together:


The Washington state legislature finds that the right to keep and bear arms embodied in the federal and state Constitutions is a fundamental freedom that existed long before the founding of this nation and state and this right should continue to be protected, nurtured, and expanded. The legislature further finds that the founding fathers of our nation and state wanted to have firearms in the hands of ordinary citizens as a means of protecting freedom and deterring potential despots from undermining our constitutional republic by force. The American revolution was won by an armed populace against the British standing army.

George Mason, coauthor of the second amendment and along with James Madison, is called the "Father of the United States Bill of Rights," stated during Virginia's Convention to Ratify the Constitution in 1788, "I ask, Sir, what is the militia? It is the whole people. To disarm the people is the best and most effectual way to enslave them."

Here's Mason on June 16, 1788:  "I ask, Who are the militia? They consist now of the whole people, except a few public officers. But I cannot say who will be the militia of the future day."

Two days earlier, Mason had said: "Forty years ago, when the resolution of enslaving America was formed in Great Britain, the British Parliament was advised by an artful man, who was governor of Pennsylvania, to disarm the people; that it was the best and most effectual way to enslave them; but that they should not do it openly, but weaken them, and let them sink gradually, by totally disusing and neglecting the militia."

To be clear, the context of this debate is focused on local state militias vs. a standing national army.

Later on, Mason says, "in case the general government should neglect to arm and discipline the militia, there should be an express declaration that the state governments might arm and discipline them." He's talking about an organized militia, not individuals. It's also worth noting that Mason, ultimately, refused to sign the Constitution. In this sense, he was not, what you'd call, a "constitutionalist."


George Washington, America's first president, said, "Firearms stand next in importance to the Constitution itself. They are the American people's liberty teeth and keystone under independence. From the hour the Pilgrims landed, to the present day, events, occurrences and tendencies prove that to ensure peace, security and happiness, the rifle and pistol are equally indispensable. The very atmosphere of firearms everywhere restrains evil interference — they deserve a place of honor with all that's good."

According to the Mt. Vernon library, the quote about teeth "does not show up in any of Washington's writing, nor does any closely related quote." Wikiquote notes that even pro-gun sites recognize the quote as a whole is "palpably bogus" as well.


Thomas Jefferson, author of the Declaration of Independence and third president of the United States, said, "No freeman shall ever be debarred the use of arms" and "Those who hammer their guns into plowshares will plow for those who do not."

The first quote comes from an early draft of the Virginia state constitution. It's worth noting that in draft the language was significantly curtailed: "No freeman shall be debarred the use of arms [within his own lands or tenements]" and it didn't appear at all in the final version.

The second quote, about plowshares?

"We have not found any evidence that Thomas Jefferson said or wrote, 'Those who hammer their guns into plows will plow for those who do not,' or any of its variations," Jefferson researcher Anna Berkes wrote. The earliest known appearance in print is actually from 2009, from a book called Thoughts: Thousands of Inspiring, Life-changing, and Humorous Thoughts.


Alexander Hamilton, in the federalist papers, wrote "The best we can help for concerning the people at large is that they be properly armed."

All you have to do figure out that this is a misquote is search the federalist papers. That phrase, as written, does not appear. The closest you'll get is in Federalist #29, which says "Little more can reasonably be aimed at, with respect to the people at large, than to have them properly armed and equipped; and in order to see that this not neglected, it will be necessary to assemble them once or twice in the course of a year."

The substance of the paper is Hamilton's argument that smaller militias, managed by the states and regulated to some degree by the federal government, is preferable to a standing army. And that also includes the right and duty of militias from other states marching over to help quash an "insurrection."  It actually fits more closely with the liberal interpretation of the right to bear arms applying specifically to a "well-regulated militia."

Hamilton was also very supportive of using the power of the federal government to squash armed insurrections, as with the Whiskey Rebellion.


Thomas Paine, American pamphleteer and author of "Common Sense" said, "The supposed quietude of a good man allures the ruffian; while on the other hand, arms, like laws, discourage and keep the invader and plunderer in awe, and preserve order in the world as property... Horrid mischief would ensue were the law-abiding deprived of the use of them... The great object is that every man be armed! Everyone who is able may have a gun."


So the first half is a slight misquote from the essay "Thoughts on Defensive War" thought to have been written pseudonymously by Thomas Paine: "The supposed quietude of a good man allures the ruffian; while on the other hand, arms like laws discourage and keep the invader and the plunderer in awe, and preserve order in the world as well as property."

As well as property is an important distinction. Paine isn't saying that order in the world is the same thing as property.

Similarly, the next phrase is slightly misquoted. In actuality, it's "And while a single nation refuses to lay them down, it is proper that all should keep them up. Horrid mischief would ensue were one-half the world deprived of the use of them; for while avarice and ambition have a place in the heart of man, the weak will become a prey to the strong."

You see, Paine argues that disarmament would be great, in theory, if somehow all the weapons could be eliminated. But by just eliminating one-half, the balance of power would be shifted in a destructive direction. In context, he seems to be talking about arming or disarming nations, rather than individuals.

(Many of the mistakes in this essay mirror the mistakes found in Dana Loesch's Hands Off My Gun: Defeating the Plot to Disarm America.)

The last quotes about "everyone who is able may have a gun" doesn't seem to appear in Paine's writing's at all.

But "the great object is that every man be armed" and "everyone who is able may have a gun," is a quote from Patrick Henry, not Thomas Paine. And it was actually given in a speech opposing the ratification of the United States Constitution. Henry, at this moment, was literally an anti-Constitutionalist, worried that the power of a federal government, with a full army, could be destructive to liberty.


The founding fathers clearly understood that the possession and use of firearms could on occasion result in unfortunate consequences as a result of criminal behavior or a tragic accident, and the large number of lives that are lost whenever freedom is destroyed and an oppressive government is established; however, they also realized the many lives that would be saved as a result of the right to bear arms helping to preserve freedom and resist tyranny.

History has vindicated the wisdom of our founding fathers. While citizens in the United States have experienced unprecedented freedom, peace, security and happiness, the world has witnessed six million Jews murdered by Adolf Hitler, fifteen million Russians slaughtered by Joseph Stalin, and an estimated sixty million Chinese murdered in communist China, none of whom were allowed to possess firearms.

As a result of these lessons from history, it is the intent of the legislature to promote freedom and protect public safety by enacting the Washington state firearms civil rights act and by imposing civil and criminal penalties on any person or public official who unlawfully or unconstitutionally interferes with the right of a citizen to keep and bear arms, or who criminally possesses or uses a firearm.

The extent to which gun control and confiscation was a reality in the Soviet Union, Germany and communist China is something that continues to be debated by historians and pundits, of course.

The bill has been referred to the judiciary committee. Historians are encouraged to testify.

Phish heading to the Gorge this summer

Review: Chelsea Does dives into big themes with wit and cynicism