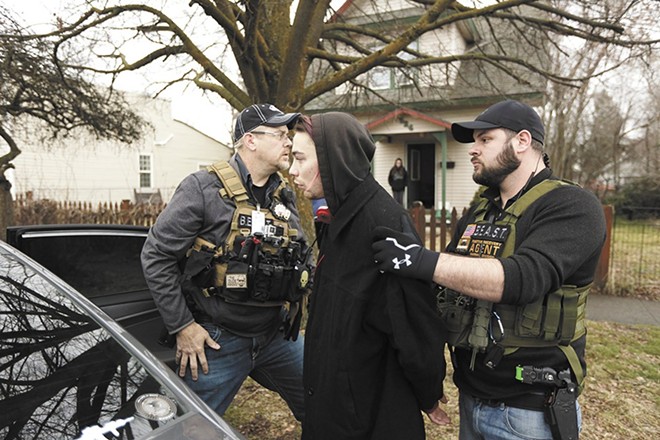 Young Kwak
All in a day's work for bounty hunters.
Last week, we wrote extensively about bounty hunters — quasi law enforcement agents with powers to search and seize outside due process restrictions. Many are armed to the teeth: pistols, rifles, Tasers, batons, pepper spray. Some have extensive training and clean criminal records, as required by state law.

For some states, however, the there are little to no training or licensing requirements, leaving the industry to self-regulate.

In Washington state, for example, bounty hunters must be licensed with more than 40 hours of training, be at least 21 years old, graduate high school or have three years' experience in the bail bond industry, be a U.S. citizen and have no criminal convictions that "directly relate to their ability to perform the duties ... or that hinders public safety." The state also requires agents to renew their licenses annually with an additional eight hours of training.

Idaho does not license bounty hunters at the state level. The only current requirement is state residency. Even convicted felons could be bounty hunters. The state does, however, sort of indirectly keep tabs on bounty hunters by holding the bondsmen responsible for recovery agents' mistakes.

"I'm very careful about who I use as recovery agents," says Rulon Evans, the owner of A-Affordable Bail Bonds in Idaho. "I always vet them, make sure they're responsible and have some kind of law enforcement or military training. We're in the business to stay in business, so you don't just hire anybody out there, because you're liable."

Eighteen other states have no statutes or administrative codes that require specific qualifications to arrest bail fugitives.

A total of 18 states (36 percent) impose some kind of regulation through state departments that require training or experience, though the amount can vary widely.

The number of hours required to get state approval ranges from eight to 80.

For example, in New Jersey, one of the more tightly regulated states, bounty hunters must have at least five years of law enforcement or private detective experience in addition to 16 hours of training at a state approved school. Delaware, on the other hand, does not specify a number of hours of pre-licensing training.

Check out this map that shows the different ways bail enforcement agent are (or are not) regulated: